All posts tagged as Mt Hood OR

Tuesday July 12th, 2016 I stood on the summit of Mount Hood, the state highpoint of Oregon. This was #44 out of 50 for me. This was a hard won summit, with my first attempt ending in failure after being turned back 700′ from the summit due to weather. The second attempt was also not without its challenges, so when I finally did make it, it felt like I had really accomplished something.

Hood has a reputation for nastiness, and has killed over 130 people. It’s one of the higher death tolls for US mountains. Even so, I was still surprised the intensity and variety of her wrath. Why is Hood a female? Because a male mountain doesn’t really care if you climb him or not, he’s indifferent. But a female mountain will fight you all the way to the top. And fight she did, throwing freezing rainstorms, icy winds, whiteouts, avalanches, hailstorms and even a fall for good measure.

As I mentioned, it took two attempts to bag this one, and the stories are tightly linked, so I have combined them both into this one trip report. 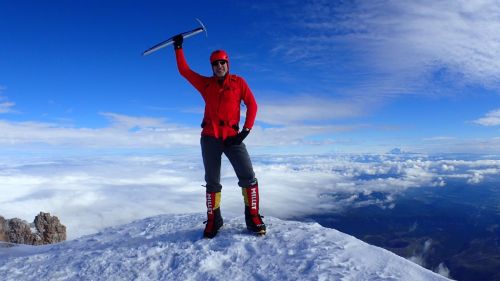 A  happy Danger stands jauntily on the summit of Mount Hood.

About the Mountain
Mount Hood, was called “Wy’East” by the American Indians who once inhabited the area. Hood is a potentially active stratovolcano located only 50 miles east of Portland. Steam is constantly spewing from fumarole areas and sulfuric gases are a hazard for climbers. Eleven glaciers grace Mt. Hood’s peak and the Timberline Ski Lodge is situated at the base of the mountain. At 11,249 feet, it is Oregon’s highest mountain as well as being one of the most visually impressive mountains in the nation based on its geographical prominence.

So state highpoint #44 is officially in the bag. I’ve been back at the trailhead for an hour, loading & sorting gear, changing out of my wet clothes, which was not fun in freezing windy conditions.

This was a very big day. A full 13 hours of non stop intensely physically challenging and technically demanding work. This was the most technical mountain I have climbed yet, and it definitely sharpened my skills and showed me some weak points.

I’ll post a report later, but for now, I’m going to go find me a wilderbeast to eat.

And now its raining and extremely windy.

Making great time and having big fun glissading & on the lower slopes now. But now Im in a whiteout. Mountain weather is so dynamic. Keeps things interesting

Now below the technical stuff. Geared up to glissade! Which is French for butt sliding on mountain. Its the fastest way to get down conditions permitting

Everything is OK, but it is exceptionally cold. My iPhone is frozen, so messages will be shorter and fewer as they have to be keyed in direct from sat beacon.

Booyah! I now stand atop Mt Hood. Sunny, light wind, clear, w great vis. I can see Rainier, Adams & St Helens. It is a perfect day to be on a mountaintop.

Past the crazy stuff, nice easy 35 degree slope from here. Next stop summit!

Just took a 30′ fall but managed to self arrest. Ice axe was buried but not holding, kicked in with crampons and managed to stop. Lost ski pole and GoPro.

Came to a 15′ crevasse. Can’t jump that far, so traversing to narrower point. Hard going, but weather holding, what a perfect day. I’m nailing it this time!

Cached some gear to lighten the load hydrated and forced down 900 calories. Heading up now! Skies are clear at summit, cloudy below. Very dramatic!

About to head up Hogsback Ridge which is the last obstacle to the summit ridge. Seeing it up close is intimidating, icy 45+ degree slope. Its 27 deg & windy.

Sunrise is breathtaking! I now climb through the crater of an active volcano, feeling the heat, seeing the steam, smelling the sulfur. What an amazing place!

Now this unexpected, I suddenly find myself climbing a mountain in a rather spirited hailstorm. Not too big mind you, but still painful. What next?

Geared up and leaving the trailhead now where it’s a balmy 48 degrees. More wind than expected, but otherwise weather is good.

If you’ve been following along, you know my first Attempt on Mt. Hood was a bust due to weather.  Here’s the plan for my second attempt. 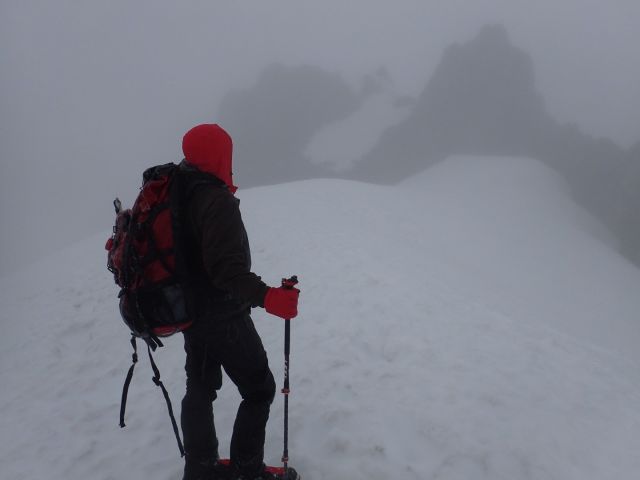 Visibility during my first attempt was insufficient to navigate the technical climb to the summit.

The climbing season ends soon, so I need to finish it this trip to make it by my 50th birthday, so I cancelled my return flight, extended my room and car and stayed. It has been suggested to me that it would be OK to slide a bit and do it during my 50th year, but that’s not the goal. The goal is 50 by 50, so I’m going to give it my best effort to complete the goal on time.

Going Solo
I’m going to climb it solo and here’s why; first because my previous Guide Ben was confident that I’m a strong and competent enough climber to handle it and thought my chances would actually be better than going with a guided group as weak climbers often turn those around. I could do another private guide like before, but the guided trips all use snow cats and or ski lifts to get higher on the mountain, and I want to climb it all myself. Also because I have been within 700′ of the summit already and did not find it particularly taxing, although the last 700′ are extremely steep, but I’ve climbed vertical ice walls before and have the skills, strength and experience. And finally because I’m a manly man and Old Spice said I could have another shot at the contract if I went solo. If that joke doesn’t make any sense to you, take a look at the Illinois highpoint trip report.

One Day Up And Down
It will be a single day, climb this time because I don’t need the head start that the camping gives you and it makes logistics simpler.

Weather
The weather has greatly improved, and Monday, Tuesday and Wednesday are all clear days. Tuesday has below freezing temperatures which will keep the snow firm and reduce the chance of rock fall and avalanches. So Unless the weather changes, Tuesday is the day.

Lighter Load
I have secured some gear from the local climbing shop, mainly a lighter pack to replace my 8 lb expedition one and a few other items to lighten the load and fill in gaps created by the new plan. I had 60 lbs of gear the first time, I expect to have 25lbs or less this time.

Timing
I’ll start at 11:00 PM on Monday, and climb the whole darn thing myself thank you, none of that lame ski lift nonsense. I hope to be at the summit around sunrise and back down before noon. It’s important to get up and down early for better snow conditions. The steep upper slopes especially become slushy when the sun hits them as well as the aforementioned rock and avalanche risk.

But as they say, no plan survives contact with the enemy, so I’ll keep you posted.