We only made it as far as Las Vegas, New Mexico today, as we were  presented with some interesting challenges.

Snowstorm!
First, we got caught in a snowstorm driving through the already treacherous mountain roads between Taos and Las Vegas, NM. The conditions were icy and visibility was low, and the tight curves and ups and downs didn’t help. The 32,000 pound coach was sliding a bit, and at one point a Subaru wagon slid over into our lane missing us by inches. We would have liked to pull over and wait it out, but there was no safe place to stop on the narrow mountain roads, so we took it very slowly and made it down the other side where the snow turned to rain. 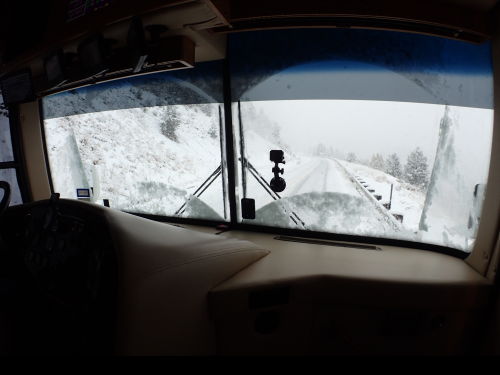 The icy mountain roads were quite challenging

Air Suspension Malfunction
As we approached Las Vegas, the air suspension began to lose pressure so we pulled into a high school football stadium so I could crawl under the coach and investigate. As I crawled around under the coach freezing rain washed under the coach drenching me from head to toe, but I could not find the problem. We decided to head to a nearby campground to get some rest and deal with the problem tomorrow. We attempted to leave the parking lot, but the suspension had continued to dump and the fiberglass nose hit the ground so I could not move forward without causing serious damage to the coach. And now the coach was so low, I could not back up on account of a monster speed bump behind us. So we were stuck in the entrance to the football stadium with a game starting. Needless to say, we were not very popular. 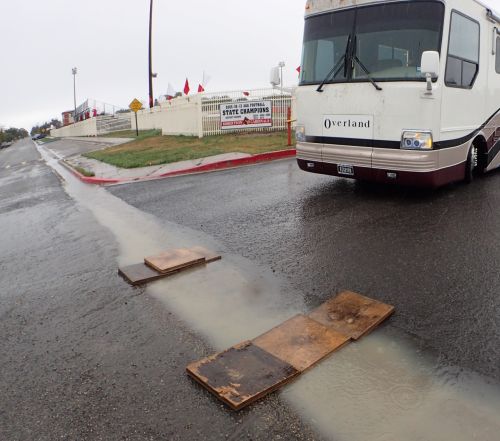 A bridge to freedom

As a hail mary, I decided to try using our jack pads to build a bridge through the low spot, and low and behold it worked! 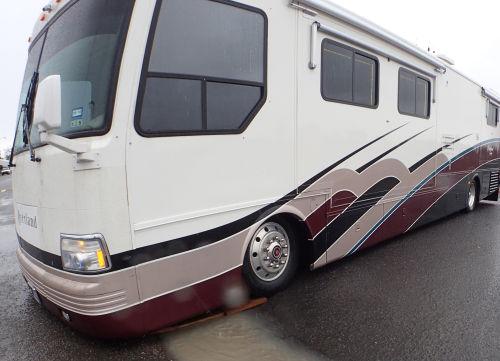 Clearing the ground by centimeters

So we were out of the parking lot, but were only able to drive a few hundred feet before we lost all air. In big coach like this the brakes lock up with powerful springs and are released with air pressure just like a semi truck, so without air pressure the brakes lock up. Now we are sitting on the side of the road unable to move, meanwhile the annoyed football fans are honking at us for inconveniencing them.

Air System, Smair System
It is a very complex air system that manages the suspension as well as brakes and has a complete backup system for redundancy. I was not sure how to troubleshoot the system as I’ve never had to monkey with it. I did have the service manual scanned so I changed into some dry clothes and sat down on the sofa to try and figure out what to do next. Feeling like I had a slightly better understanding, I took the Jeep, bought a creeper (much nicer than crawling on wet pavement), and went back under the coach looking for a damaged line, or something obvious, but could find nothing. 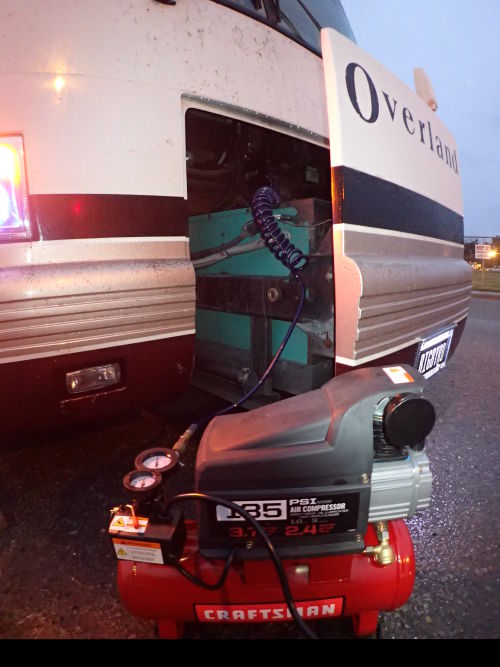 Sears to the rescue

The system was simply not replenishing the air supply as it typically does, so I threw another hail mary. This time, I picked up a Sears Craftsman compressor, spliced it into the system, and fired it up. It took a long time, but eventually the air pressure came back up allowing us to limp to a nearby campground.

Yes Dear, I totally have it under control
I was really feeling out of my depth and not sure what to do,but Susan was not worried at all. She really thought I had everything under control and I didn’t want to tell her otherwise, but I was sweating bullets. Maybe it was luck, maybe it was the prayer, but I was quite relieved to see those air gauges come to life.

My plan is to install the Sears compressor in the basement tomorrow to keep the air system pressure up, and hopefully that will get us back to Texas.