Mt. Rogers is the State Highpoint of Virginia and was the 2nd of 5 and the most substantial highpoint of our 2014 SouthEast Trip. Rogers was number 23 of the 50 state highpoints for me. 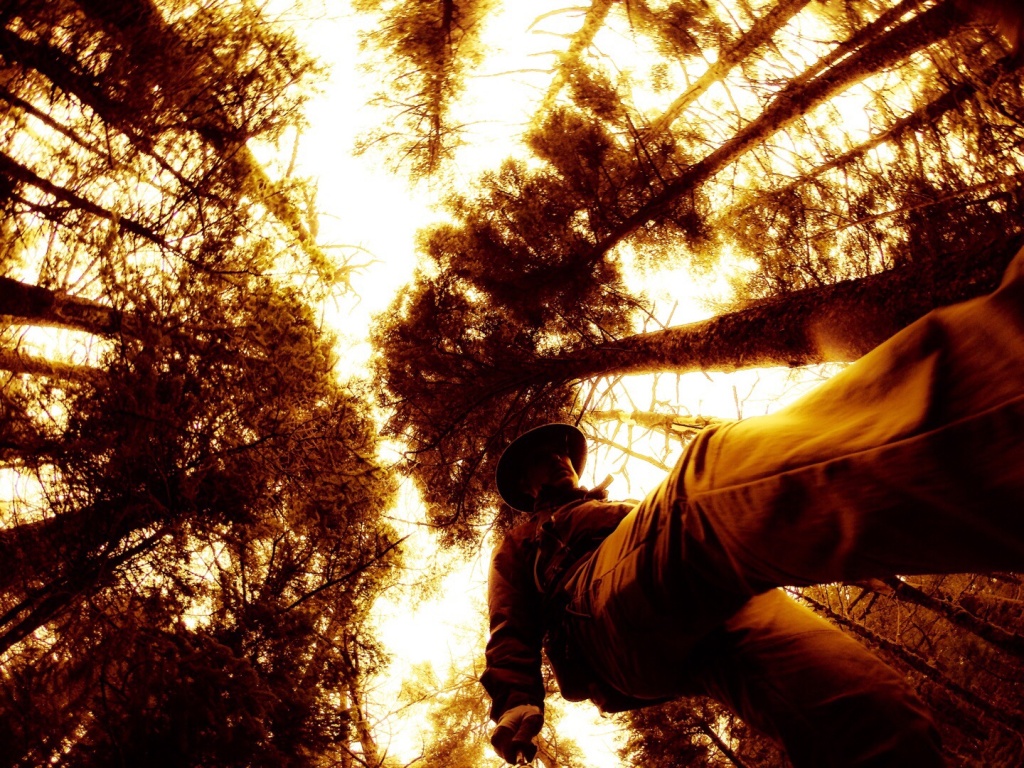 Rogers is not technically difficult, but it is an 8 mile hike with 1,510′ of elevation gain. Susan was not sure she wanted to attempt this one as it was almost 4 times longer and much higher than Mt. Frissell, CT which was tough for her, but in the end she decided to give it a try.

The weather was cool and foggy, but the weather forecast promised zero percent chance of rain and temps just above freezing which are nice to hike in. So as we were gearing up, I advised Susan to leave a couple of he heavier layers behind as they would not be needed and just be dead weight and slow us down. As usual, we only carried a single pack which I would wear so I was also worried about room in the pack. She didn’t care how experienced a mountaineer I was, she was cold and was taking them with her and that was that. Her skill of not listening to me, came in quite handy here as they were indeed needed later as the temps fell into the teens and the snow and wind arrived.

We got a later start than we wanted and left the trailhead about 10:26 AM, but I was not worried. Susan likes to take her time so I had estimated it would take us about 7-8 hours, but in the end it took 9 hours round trip.

Wild Ponies
After an hour or so of hiking, we passed through some pastureland populated with wild ponies. They were all different colors and as fat as any ponies I have ever seen. They were. It all that wild though and allowed me to get pretty close. One tiny stallion actually followed us for a while. 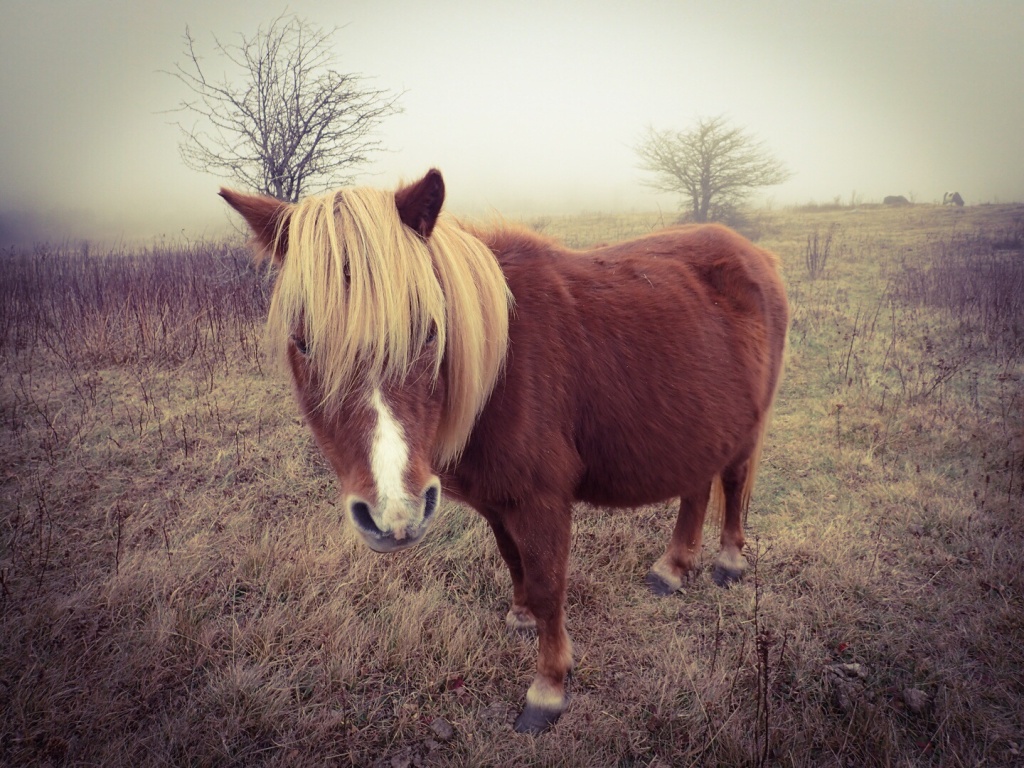 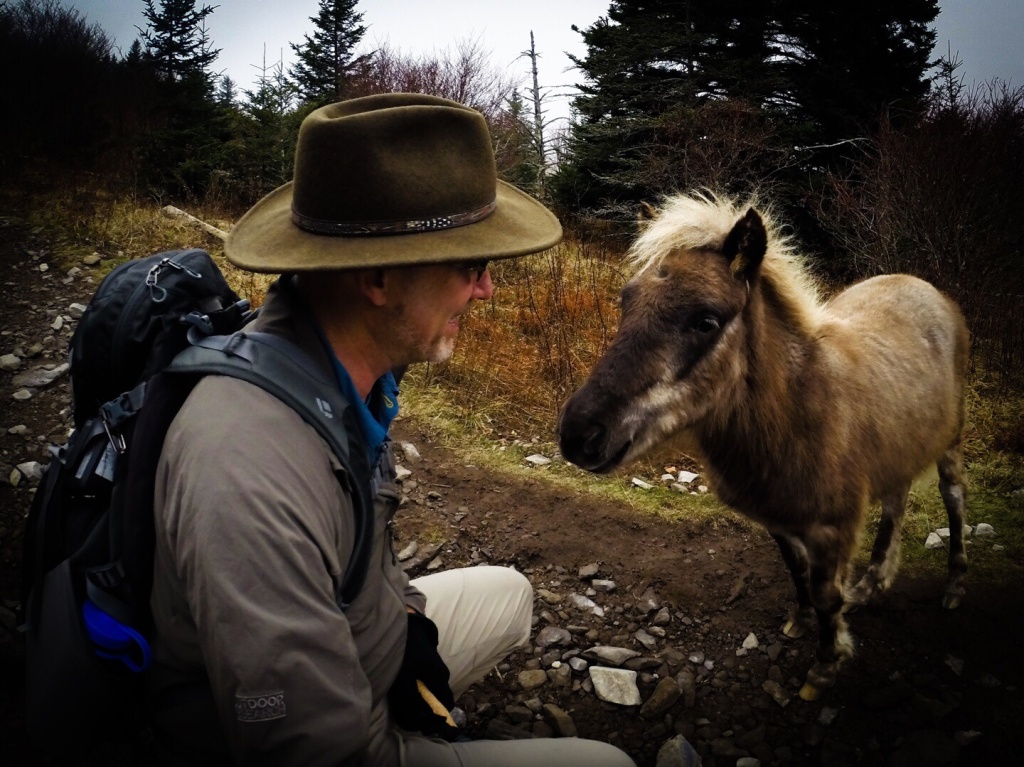 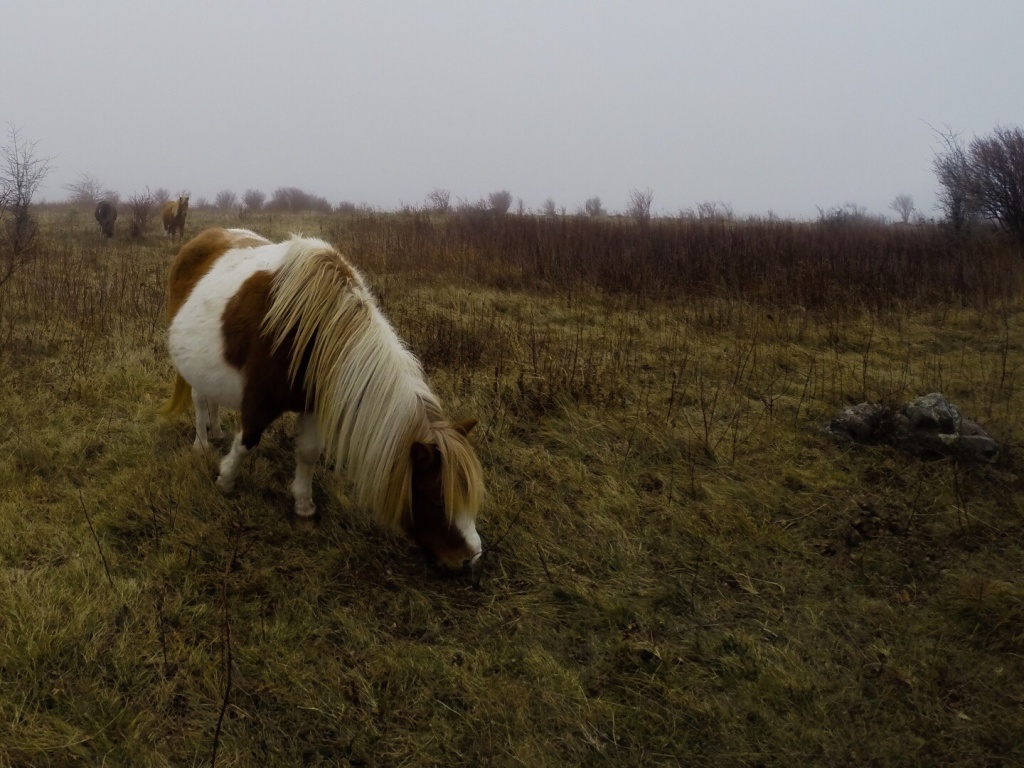 Secret Weapon Deployed
Around noon Susan became concerned about her ability to continue. The rocky terrain was increasingly challenging and she was running out of energy and wanted to turn back. I encouraged her to rest and eat and assured I would take her back down if she wanted, then go back up and do it on my own. I then gave her honey infused with caffeine (my secret weapon). While she rested I scouted ahead and found an easier route through the rocks we were climbing through, and when I got back, she was ready to carry on although she was not finished complaining.

Between a Rock and Another Rock
Around 1:00 we passed through some very interesting rock formations, and it was a nice change as the temp had dropped and the wind was picking up so the shelter of the high rock walls around us was a welcome change. Of particular interest was a section of the trail where the trail passed through a rock tunnel complete with pools of water. All it needed was some piranhas in the water and it would have been the perfect cliche. 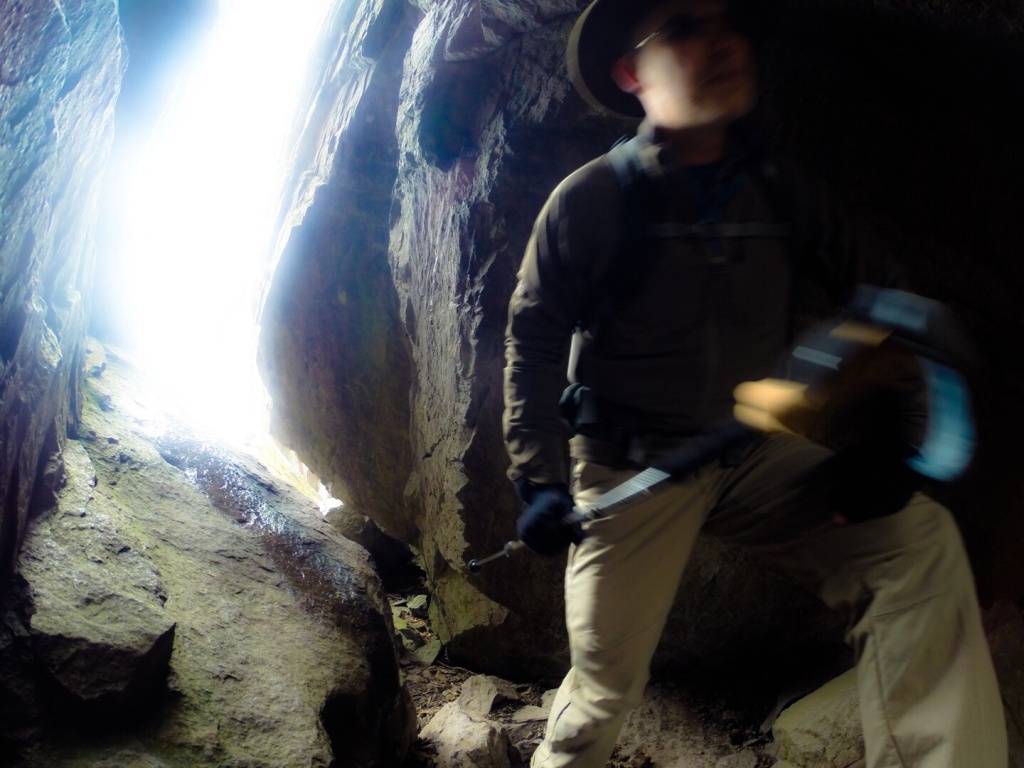 And at the entrance of the rock tunnel was a tree partially embedded into the rock and it presents a real puzzle.  I’m not sure how that could occur, but it did and here is the photo to prove it. 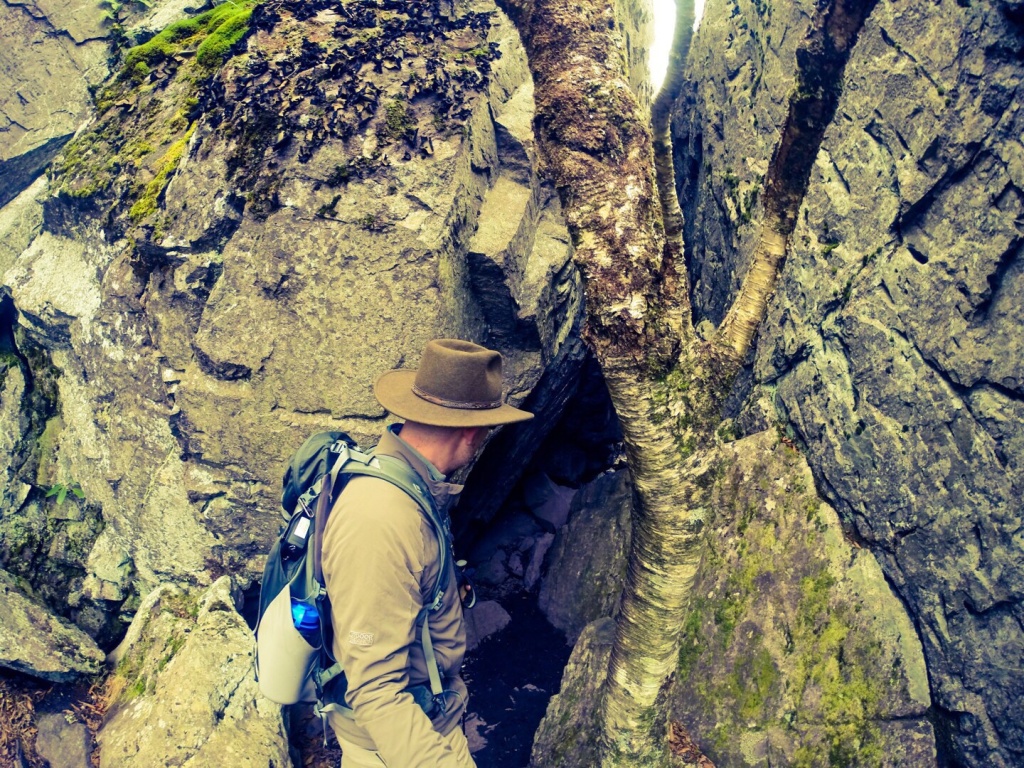 We also noticed some curious mold formations on the rocks in this area and I took a few macro photos. 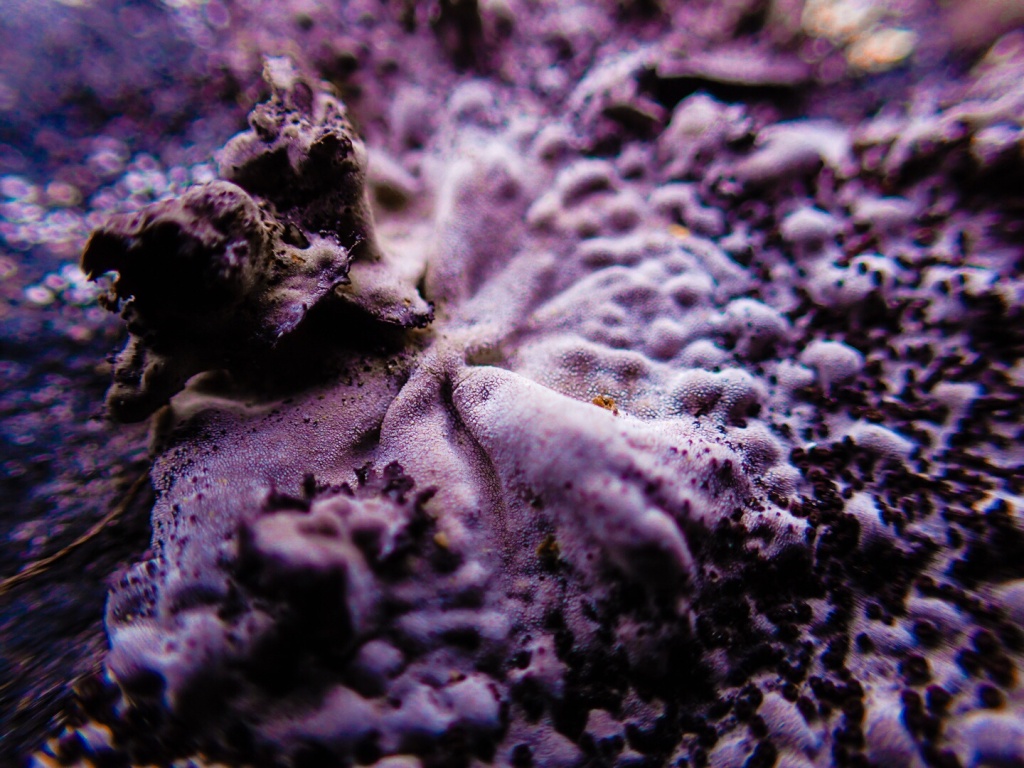 Colder Still
When we climbed above the rocks, we found that the wind had picked up even further and the temp had dropped further. I ended up donning all of the layers I had with me and wore them for the rest of the trip. Susan sent me an “I told you so” through the telepathic link that forms after two decades of marriage.

Snowball Fight
We ran across a patch of snow  and Susan exhibited very bad form by throwing a snowball at the cameraman. She scored  a direct hit with half the snowball hitting the camera and the other half my neck sending a shower of ice down inside my clothes.  This proved to be excellent practice for remaining calm in the face of adversity, and I acquitted myself well. 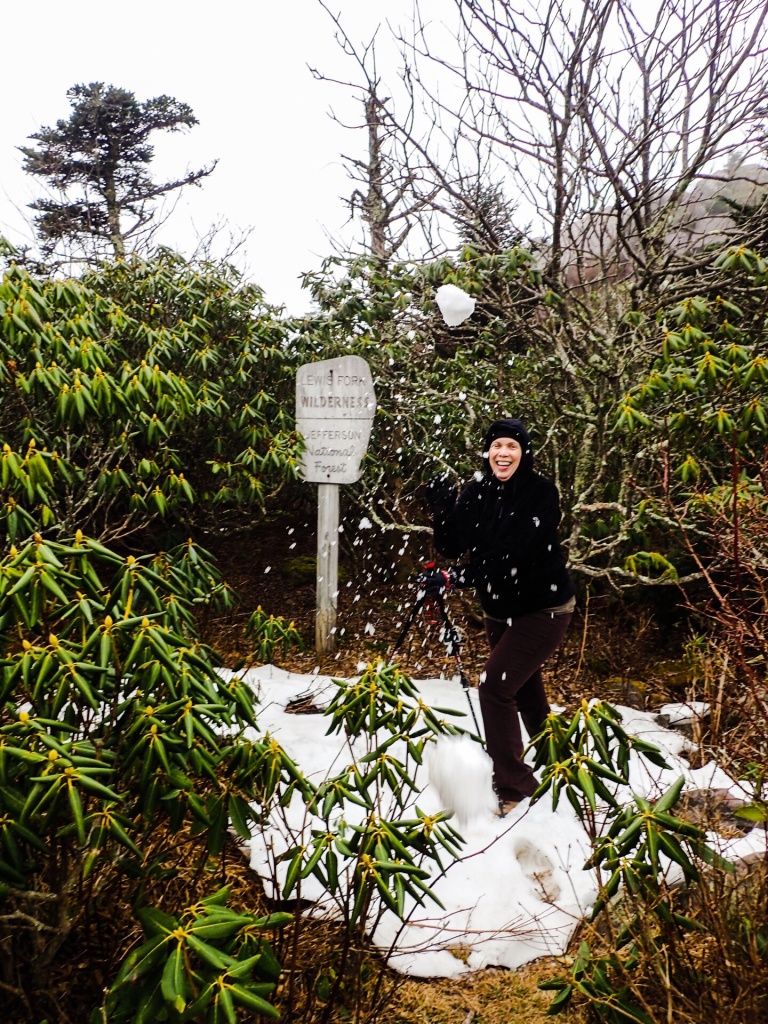 Mossy Forest
Just below the summit we passed through a serene and densely wooded forest with many downed trees covered in moss. The trees gave us a much appreciated respite from the biting wind. 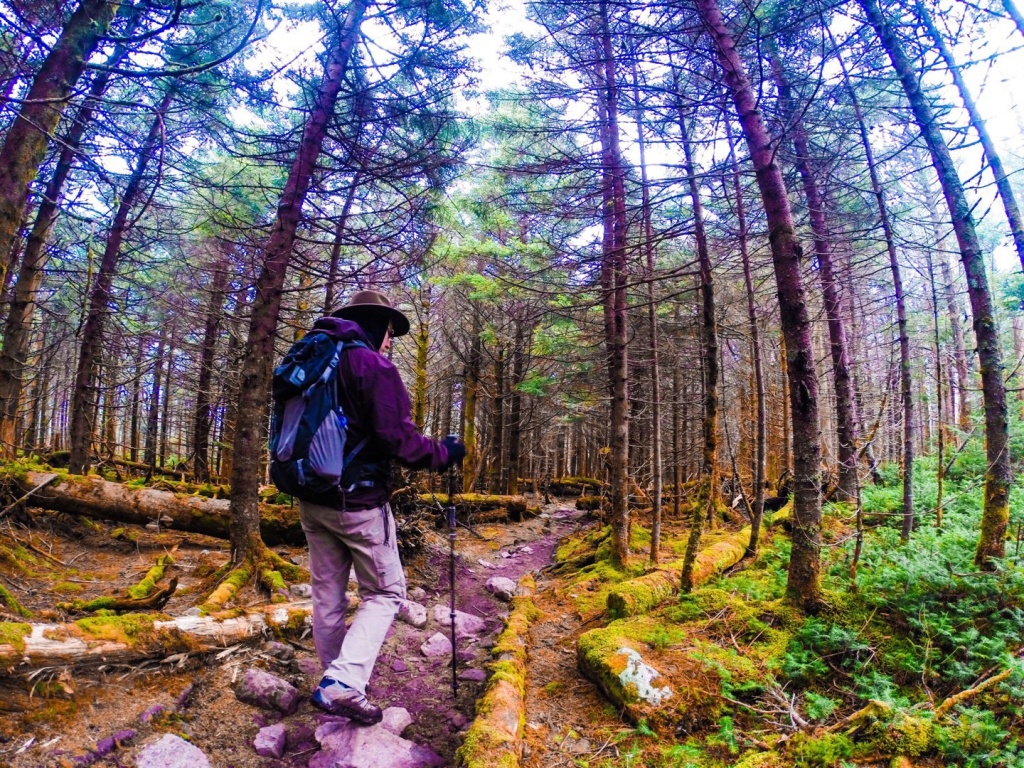 Summit Time!
We made the summit at 3:30 PM. It was colder, windier, misting (so much for the weather forecast) and by this time we realized that we were going to run out of daylight so we didn’t stay long. We had a quick snack took our summit photos and headed back down. 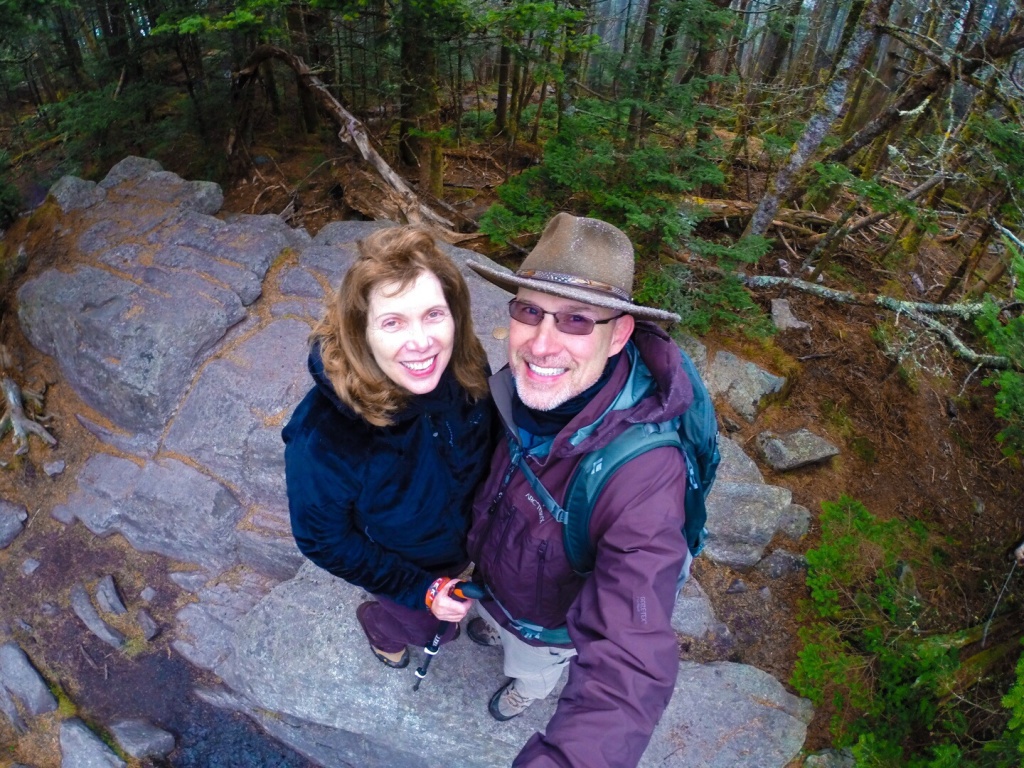 And Then There Was Snow…
As I mentioned earlier, the forecast had called for a perfect day, with temps in the 30s which is nice for climbing. However On the way back down, in addition to the temperature dropping into the teens, the wind redoubled it’s efforts, the fog intensified and it began snowing further reinforcing our disdain for the universally incompetent weather man and his ilk. 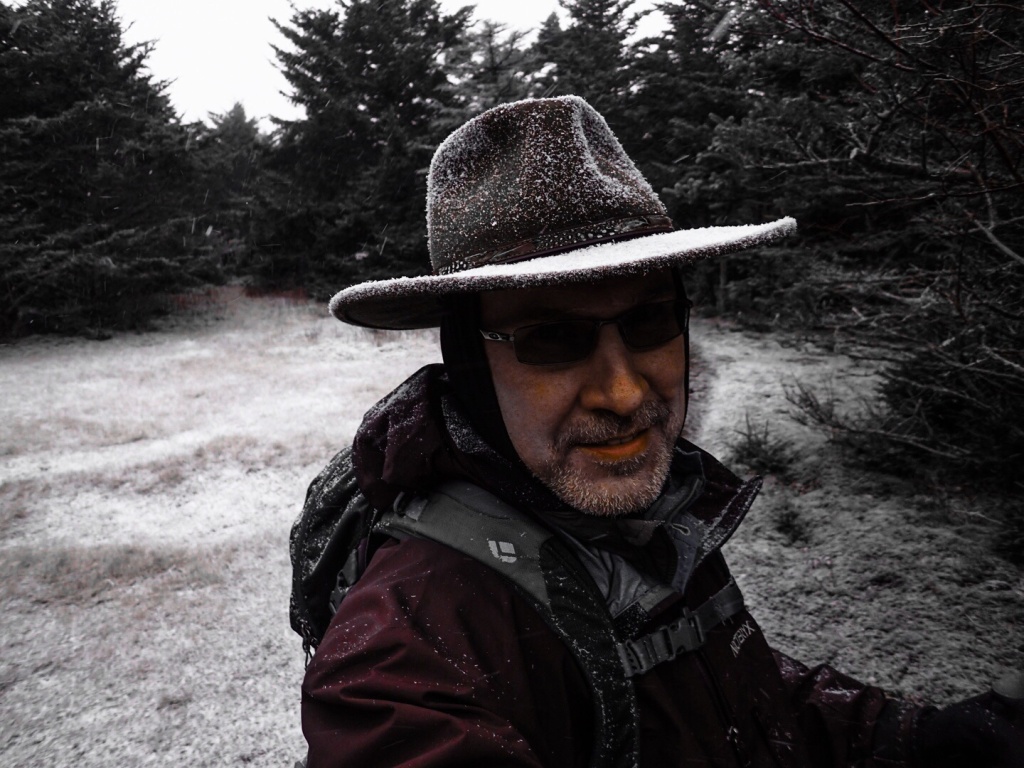 Despite the worsening weather, Susan was moving considerably faster despite being VERY tired. She was in a state of “Lack-O-Complain” (total absence of complaining) which is a very dangerous condition that lies between total exhaustion and coma. 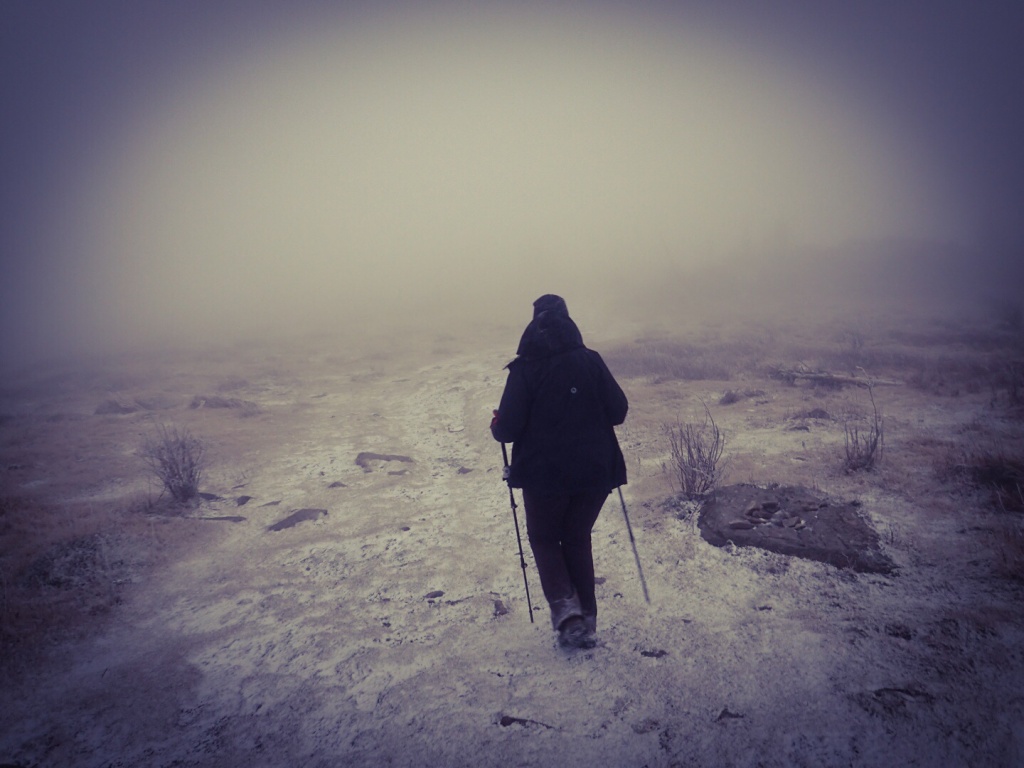 The Nightshift
Around 5:30PM it began getting dark and soon after we could not see where to put our feet. I was hoping we could get by on moonlight, but the fog blotted all light from the moon and stars. Susan fell a few times once gouging her back on a nasty rock. I had been reluctant to use the single light from my emergency like because the one without the light would be disadvantaged due to their night vision being ruined. However we had no choice, so I gave it to Susan and I stayed in front of her. I found I could see better f I walked bow-legged, letting the light hit the rocks in front of me. So I tried a couple of jokes in my best John Wayne voice but Susan was immune to my humor at this point. 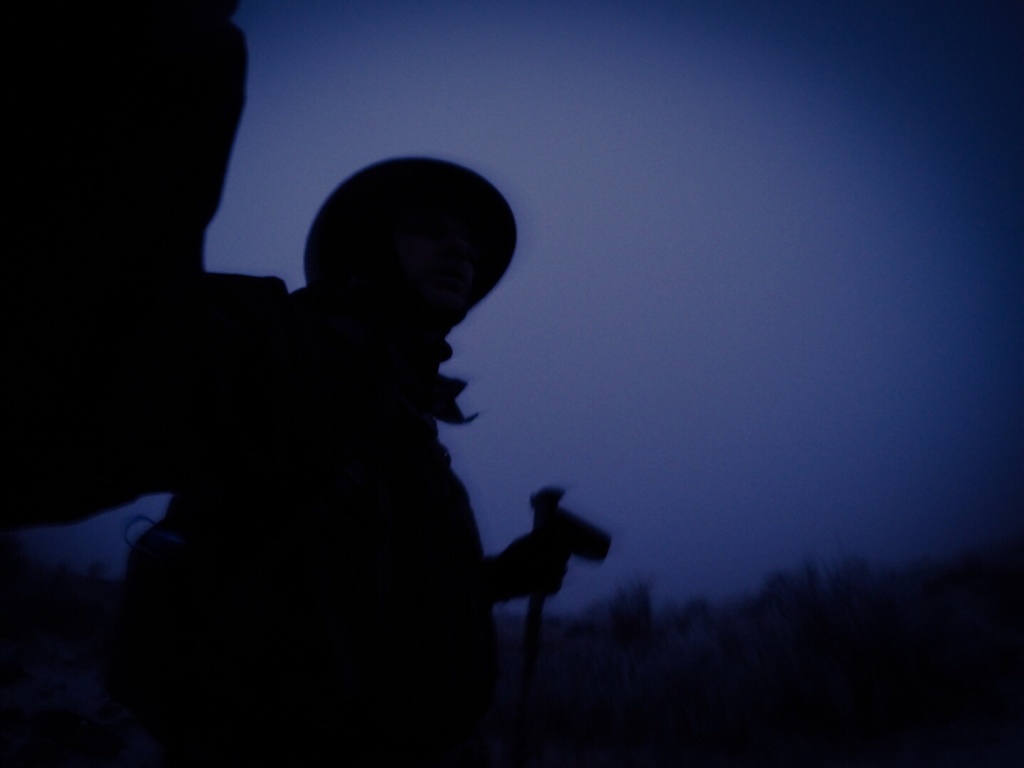 We were low on food, water, it was foggy, freezing, snowing, windy and we had a single flashlight between us.  As we neared the bottom the low battery indicator began ominously flashing. So we picked up the pace and stumbled our way down the mountain, making it back to the car at 6:30PM 9 hours after setting out no worse for the wear excepting some bruises Susan picked up falling on the rocks. We were very hungry and had lots of food in the car, so we cranked up the heater, feasted on lunch meats, cheeses, grapes, crackers, apples ETC and reveled in our newfound appreciation for  heated seats.

28,000 Steps!
Susan was wearing her FitBit which tallied up just under 28K steps and 11 miles. And bear in mind that these were not your typical walking around the mall steps, but up and down rugged terrain so she gets extra kudos for that. 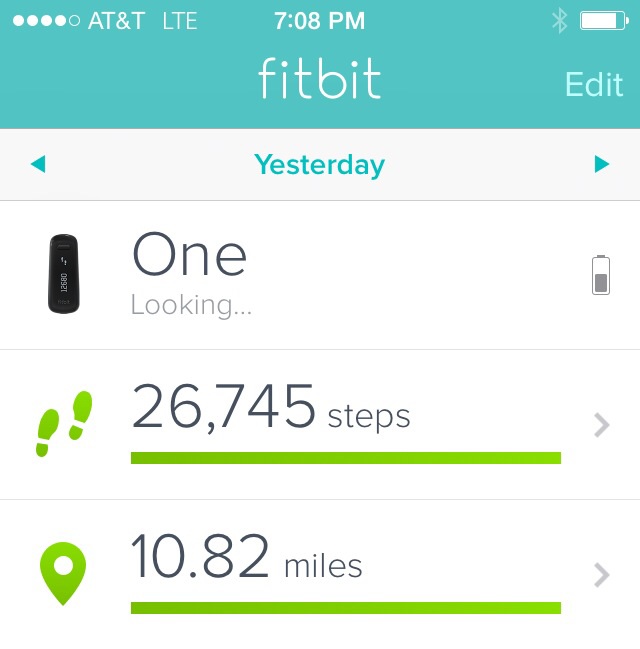 Day of Surprises
This climb was full of surprises, some pleasant, others not so much. The biggest surprise was the dramatic weather changes, which I have seen on big mountains, but never on a minor one like this. It would have been better to start earlier, and to have a second headlamp, otherwise I felt we were well prepared and had what we needed to get the job done.

I’m crazy about my wife and was thrilled to share this adventure with her. We now have yet another cool memory to share as we grow old together. 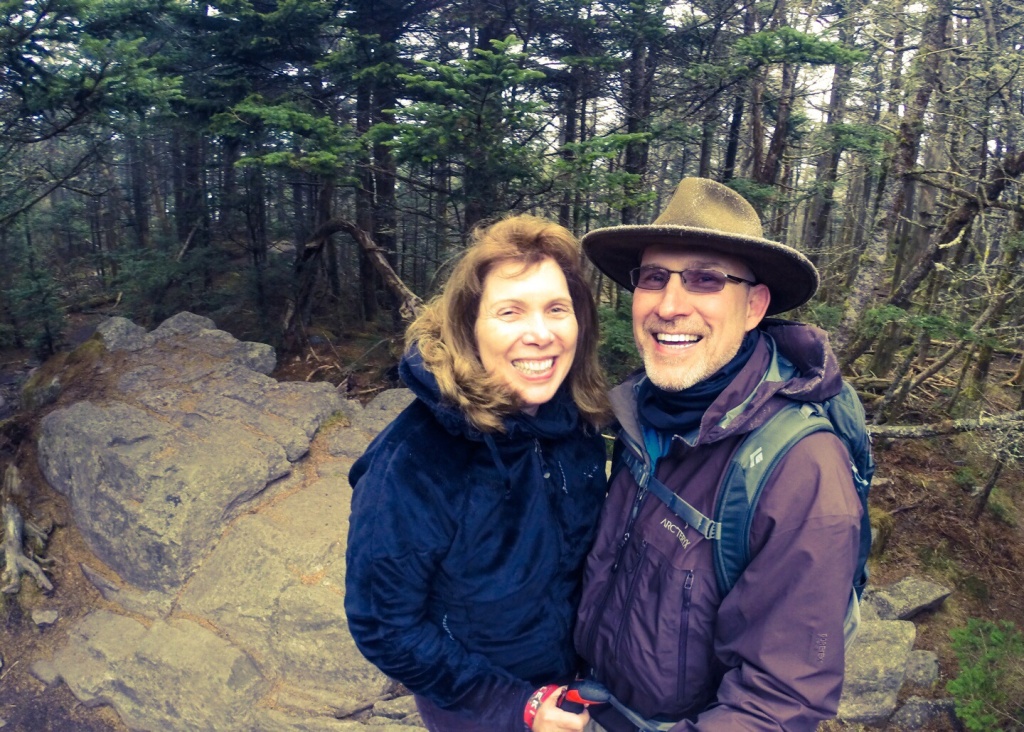