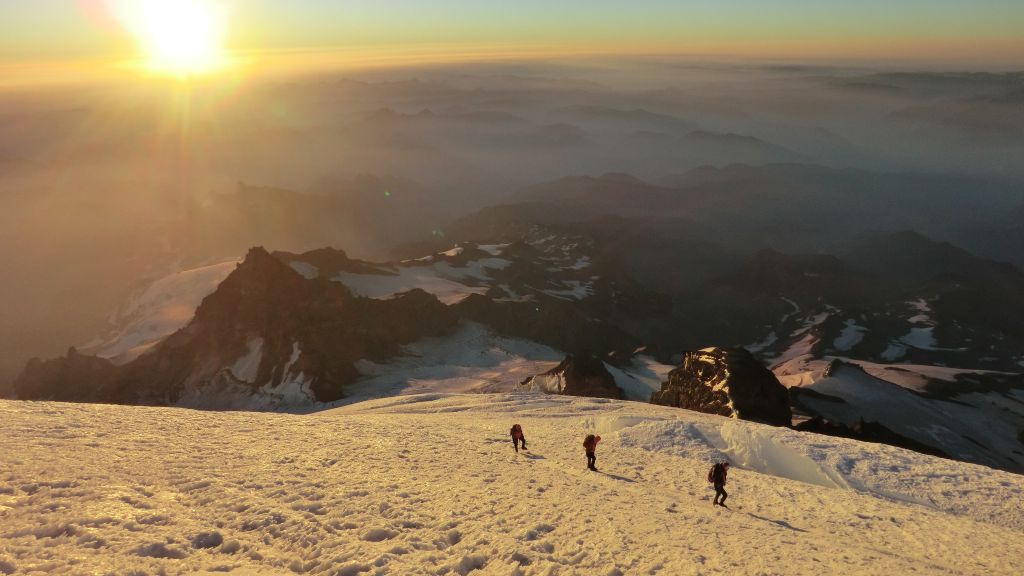 Mount Rainier is a massive stratovolcano located 54 miles southeast of Seattle in the state of Washington, United States. It is the most topographically prominent mountain in the contiguous United States and the Cascade Volcanic Arc, with a summit elevation of 14,411 ft. Mt. Rainier is considered one of the most dangerous volcanoes in the world, and it is on the Decade Volcano list.

I climbed this one with my good friend, climbing partner and fellow Houston EO member Rick Crapshoot Overholt. Indecently, this was state highpoint 45 for him so it may be our last climb together as he only has a handful of drive-up peaks left and Denali which he will be skipping (pansy).

The story of two old guys and a mountain…

Sunday Sept 10th
We started at Paradise at 5,420ft and our lead guide Josh set a quick pace, marching us up the base of the mountain towards Camp Muir at the disagreeable elevation gain of 1,000 ft. per mile. The rapid elevation gain combined with the 60lb packs full of mountaineering gear made this quite demanding and it was immediately evident that some of the eight climbers in the party were not going to make it. My own legs were burning, my respiratory system was in overdrive and my mind was reeling with the enormity of the task ahead. During this long slog, I found myself wondering if I had what it took to get to the top. Since completing the legendary Gannett Peak two months ago I had become overconfident and only trained 2-3 days a week. Rick on the other hand had maintained his training intensity, with 4 hour sessions carrying a heavy pack up and down the hills surrounding buffalo bayou three to four days a week and an hour on a stair master on his light days with the same pack. Ricks training really showed here as he was up front with the strongest climbers. We hiked through some beautiful meadows and snowfields but I saw none of it so intense was my focus on the simple process of walking. Rick could also not remember walking through this section on the way up. The common Step-Rest, Step-Rest, Step-Rest technique is the only way to get up a hill like this, and the chant became my primary focus for the next three days. Even now as I write this my brain still wants to echo that chant.

Camp Muir at 10,080 ft. was downright ugly in its shantytown appearance. There were a number of buildings assembled from the flotsam and jetsam that had been dragged up the mountain over the years. It had the look of a sparsely populated refugee camp. Our entire group slept in a boxcar like ramshackle building that provided good protection from the howling icy winds. I settled into my sub-freezing rated sleeping bag with my favorite REI silk long johns prepared for a cold night. To my surprise I soon woke up soaked in sweat. There was no heater, but having everyone in the same box generated tremendous communal body heat. I went outside for a few minutes to let the wind dry my long johns and ended up having to sleep on top of my bag. People were up constantly going to the bathroom, and the cacophony of snoring shook the tenuous walls, but the day’s exhaustion took me under with little trouble.

Monday Sept 11th
So we got a good night’s rest, despite the less than ideal conditions in “the boxcar”. We convened in the mess tent which was a short but treacherous hike away from our mountainside hotel. The first order of business handled during breakfast was to identify the snorers. Fingers pointed all around, and some even at me? I maintained my standard policy on the topic; having never heard myself snore I refuse to believe it.

After breakfast and a briefing we then proceeded out onto a deeply scalloped section of the glacier and the guides worked with us to determine our individual mastery of core mountaineering skills such as crampon techniques, self-arrest and rope work. They then proceeded to train us on new techniques suitable on Rainier. Rick and I have hired private coaches to work with us on various aspects of climbing and mountaineering, so we thought we were fully prepared in that regard. However all mountains are not the same and they will dictate different use of the same tools. Take the ice axe for example; you generally walk with it on the uphill side using it much like a walking cane. You plunge it in hard enough to break the outer layer of snow and ice moving it forward every two steps  If you fall your body weight drives it all the way to the head you are holding onto and stops your fall. This very technique saved my life on Gannet peak. You can also create your own ladder in a vertical wall by grabbing the axe by the handle and driving the shaft into the wall, pulling yourself up, kicking in steps, and repeating the process. But here the ice is rock hard, so none of that works.

The climb up to Ingraham Glacier was short but challenging. We crossed our first small crevasses here, and had some tricky rock climbing between the two glaciers made more challenging by the heavy loads. When we got to high camp we were awestruck by the site. Camp was in the middle of an active glacier with huge crevasses, seracs and icefalls. There was even a crevasse running right through camp. A neat row of expedition grade tents were pitched on level beds carved from the ice on steeply angled section of the glacier.  In fact one small crevasse had formed near one of the tents since the last expedition a few days earlier causing damage to its ice foundation that the guides repaired. To our surprise they did not move the tent, but simply repaired the base so the tent sat level.

When I say active glacier, I mean ACTIVE! It creaked, groaned and popped often. Some of the groans seemed to span the entire valley, and others sounded like nearby shotgun blasts. Some glaciers on Rainier have been recorded to move over two feet per day.

Before settling in, Rick and I took some photos, and of particular interest was a massive serac teetering into a void. While setting up camp, we heard a bone chilling cracking groan that shook the entire glacier under our feet. We turned to witness the very serac we had been taking photos of slowly break away and disappear into the giant void. The guides all said it was the largest icefall they had ever seen. But this sort of excitement is not for everyone, and we lost our first climber here. While the rest of us turned in for some rest, two guides took him back down to Camp Muir and they came back up to grab a few hours themselves. We put in around 5:30PM but found it hard to sleep with the sun still out. At 11,039ft this was the highest either Rick or I had ever camped and the first time sleeping on a glacier. And they are just as hard and cold as you would imagine. The glacier continued its crooning while we tried to get some sleep, which most did not.

Tuesday Sept 12th – Summit Day!
On summit day we awoke at midnight, geared up and roped into three man teams with Peter as our guide. We left camp just after 1 AM for the summit. It was very dark and we could only see what our headlamps could illuminate. We traveled through a winter wonderland of sprawling, towering and magical ice formations. The groaning of the glacier, the darkness and the light reflections from the ice crystals made it feel very otherworldly. The first major hurdle was getting across the battle zone that we were camped on. I counted the crevasses on the way up to the summit and there were over 35 of them most on Ingraham Glacier. They varied from small cracks less than an inch wide to 6 ft. wide gaping maws in the ice that had to be crossed using ladders. Some of the climbers were understandably freaked out by the larger chasms. But fear factor notwithstanding, this was the only easy part of summit day. Once we cleared the glacier and made our way onto Disappointment Cleaver the climbing was steep and technical consisting of mostly glacier all the way. Some sections were so steep they had to be climbed by walking backwards up the mountain to keep more crampon points on the ice. At one point we were traversing a steep section and I looked out to realize we were surrounded by sharp man sized teeth of ice. A fall in that area would deliver a person’s body down the mountain is several smaller easy to carry pieces. The going was much harder now, and another climber gave up halfway to the summit and had to be escorted back down the mountain just before sunrise. The sunrise was awe inspiring and almost worth the climb alone.

We made it to the summit crater around 9:20 AM. This is a volcano and there are active steam vents in the crater that form fantastic sprawling ice caves, but we did not have time to explore these. After a short food and drink break we climbed on up to the true summit at 14,410 ft. Once there we took in the amazing view of the mountain, valleys and glaciers. The EO flag we had commissioned to carry to the top for a photo was the victim of a logistical snafu so we had to improvise and we hope you like our solution. We would have stayed longer but the guides were anxious to get off the mountain so back down we went.

Coming down was demoralizing and painful and the words “death march” were bandied about more than once. I was feeling pretty good, and downright giddy in the thick rich air as we began to descend. Rick who tore his ACL a few months back and decided not to fix it was having some knee problems and moving slowly the last two miles. (That’s right, Rick climbed a mountain with no ACL in one leg.) Peter who stuck with us all the way down offered to carry Ricks pack, but Rick heroically insisted on carrying it out himself. It was 18 hours later by the time we got back to the bottom making this the most physically demanding day of my life.

So it’s the day after summit day as I write this, and aside from blisters and sore muscles we both feel fine. Climbing this mountain was the singular most difficult thing I have done both physically and mentally. I had to continually dig deeper and deeper just to keep going. I am amazed at what the human body is capable of, and thrilled that God has given me the ability and the inclination to experience some of his best work with my own senses.

I often come back with a bit of a perspective shift, and this time came back with a question that is now burning in my mind; what could be accomplished if I ran my business with the same singular focus, determination required to climb a mountain?