On Wednesday August 17th, 2016, I stood atop Eagle Mountain, the state highpoint of Minnesota. It was a fun climb, and the drive up from Duluth was enjoyable. 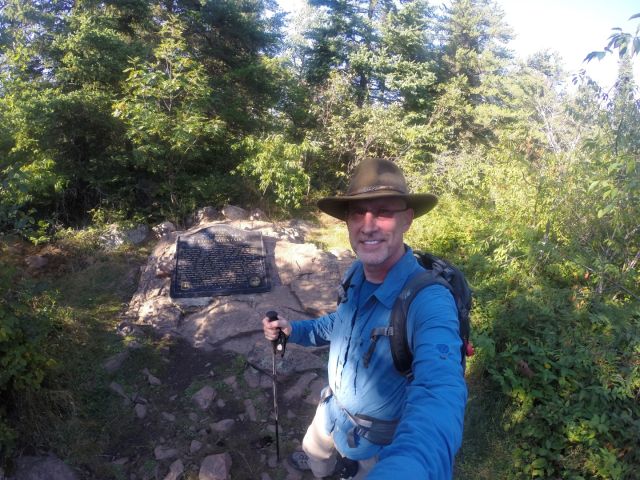 The summit was shrouded by forest, but quiet and peaceful.

Descending with Danger Video
If you ever wondered what it might be like to hike along with me, this 93 second video will give you a taste. This is the first time I have tried anything like this and I’m not sure it is worth the effort, so I’d like to hear your feedback. I was moving fast so the video is a bit frantic. The entire descent took a little over an hour and a half. There is hiking over rocks, dirt and boardwalks, as well as biking, and all footage is shown at actual speed.

The Story
I had intended on doing this one a day earlier on the 16th, but heavy rains on the 15th, and thunderstorms on the 16th shifted my plans, and I did Wisconsin on the 16th instead. This meant that we needed to stay another day in Duluth, which was problematic because a couple hundred thousand people were coming to Duluth to see some old ships, and a giant rubber duck which I have mentioned in a previous post, so I won’t belabor that story here. 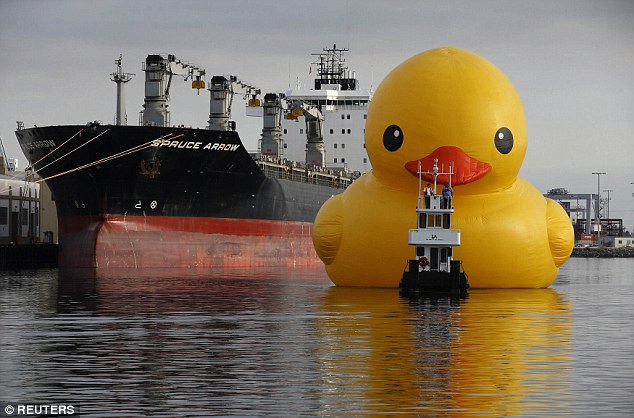 The giant rubber duck that caused all the trouble.

We did manage to find another spot, and so we relocated the coach the morning of the 17th and I took the jeep and headed north to Eagle Mountain. The drive up the shores of Lake Superior was pleasant and offered many scenic views. 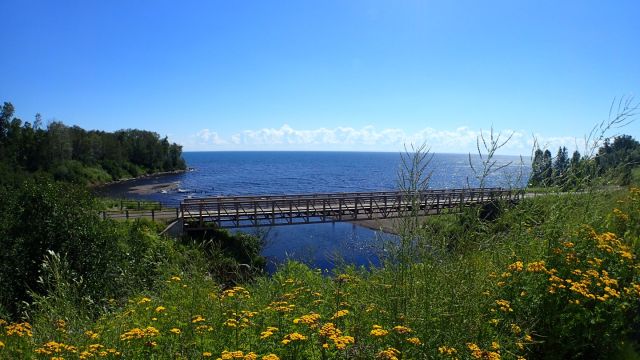 One of the many scenic views along the shores of Lake Superior.

I also found a number of very beautiful settings deep in the woods along the rural road to the trailhead. I was on a schedule, so I didn’t stop for everyone, but I did stop and snap a few photos along the way. 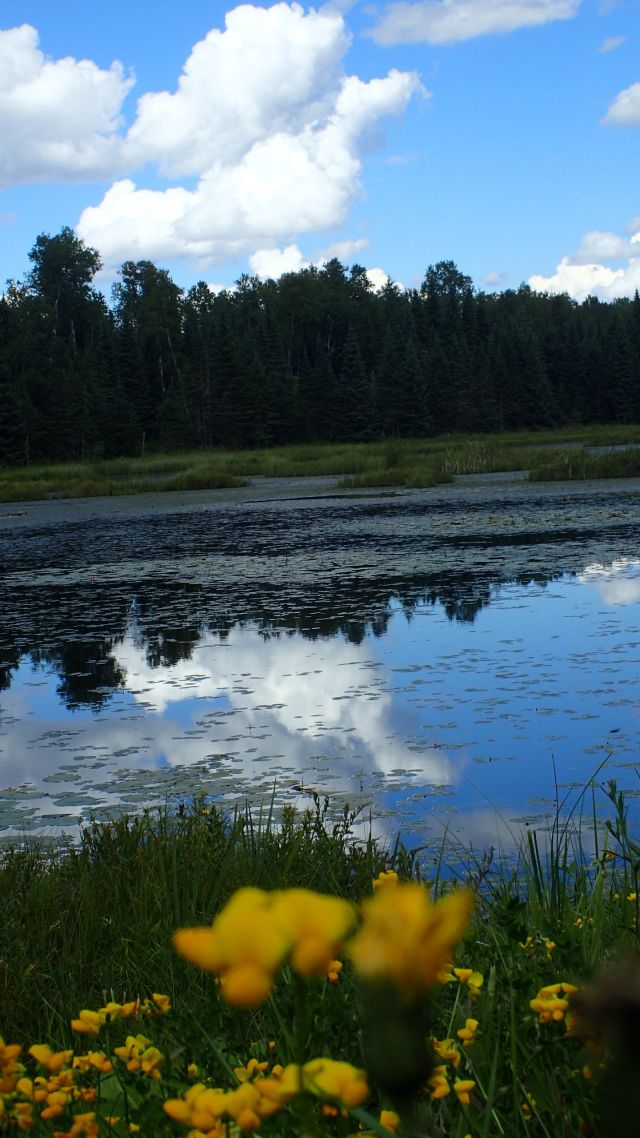 A serene pond I happened upon, just a few miles from the trailhead.

Bad Decisions Make Great Stories
I had one of our DownTube full suspension folding bikes in the back of the Jeep and I’ve ridden it on rough trails before and while it requires a lot of management, it handles pretty well. I’ve been riding for a long time, and have done crazy stuff on my full size Cannondale Jekyll and am not without some skill. I knew the trail was rocky and thought it might be a fun challenge to see how far up the trail I could ride the folder bike. I spoke to different hikers coming down, inquiring about trail conditions, and they unanimously told me it was not possible, which encouraged me. After all, doing the impossible, is my favorite thing!

In the beginning I made great time, and it was loads of fun to fly through the trails leaping and dodging rocks. 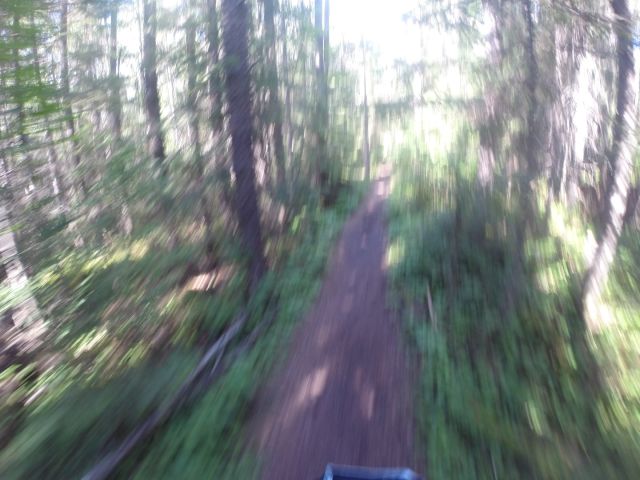 Made great time, until I hit the rocky areas.

But then a big drop off at a knarly rock caught the derailer and rendered it inoperable, so I could no longer shift gears. I reluctantly accepted defeat and left the brave little soldier waiting beside the trail to be carried out on my return. 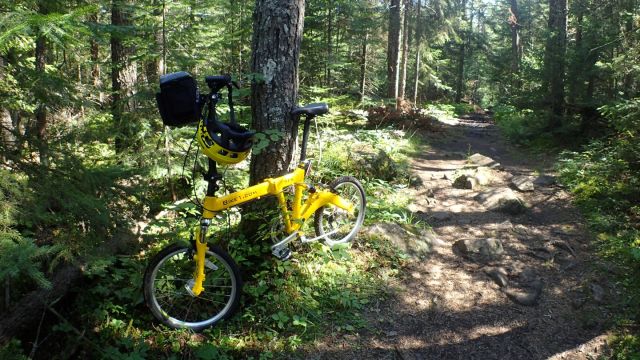 This is as far as the brave little folding bike made it.

I continued on foot, which was always the plan. I knew I would not get all the way to the summit, but I had hoped to get further.

Were I on my full size Cannondale, I could have taken it all the way to the summit, although I would have had to carry it up a few steep and rocky spots. The ride down would have been spirited, but manageable.

The trail was rocky most of the way, with some fairly smooth sections and a few boardwalks crossing over streams, bogs and especially muddy sections. 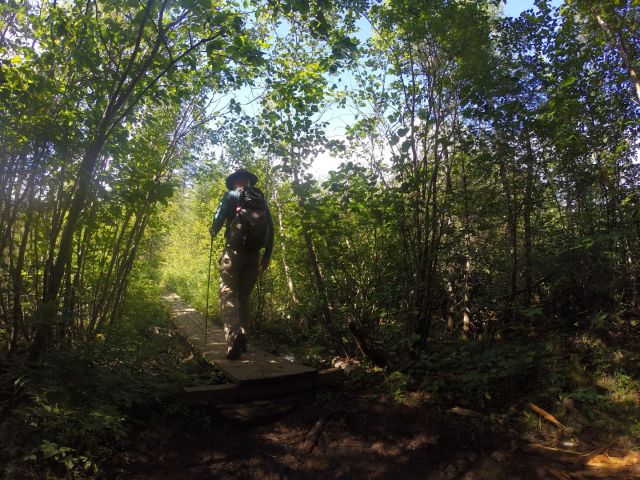 There are a few boardwalks passing over boggy areas, but the trail was otherwise solid.

From there I made my way to Whale Lake where I found an inspiring view. After that I began to gain elevation in earnest. 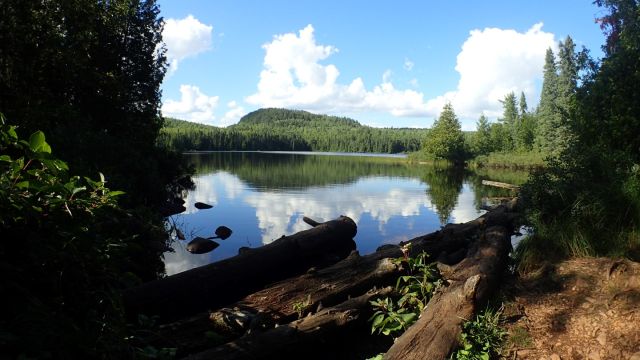 A view from the edge of the becalmed Whale Lake, reflecting the forested hills and skies above like God’s own perfect mirror.

The hike from Whale Lake to the summit, was pleasant although rocky. The trail wound through heavily wooded terrain, with 2 points overlooking the valleys and lakes below. The highpoint itself, was deep in the woods in a small clearing, and was quiet and peaceful, but offered no views. 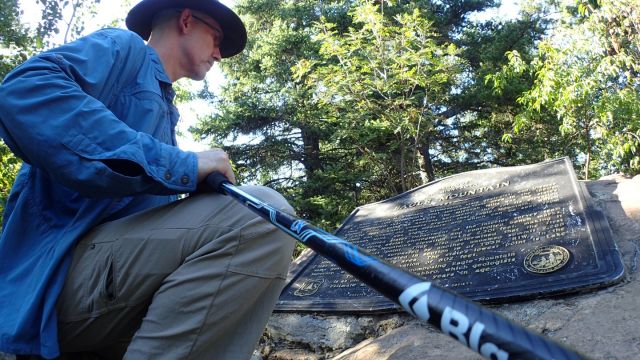 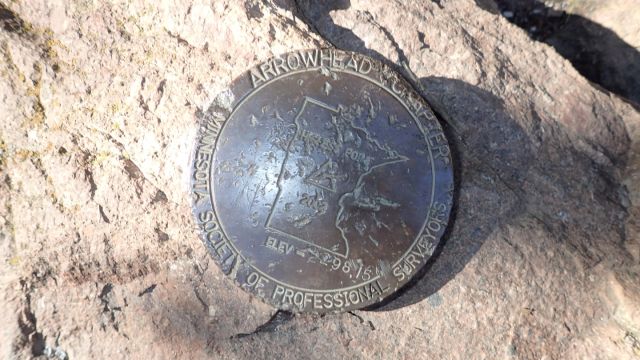 The summit marker, that officially denotes the highpoint.

I stayed at the highpoint long enough to take it in and snap the requisite photos, but I had in mind to spend some time at the higher of the two scenic overlooks I had passed on the way up. There I took my only break of the day and enjoyed the peanut butter and honey sandwich Susan had prepared for me.

A Classic Mountain Scene
The skies were blue, with just enough clouds to provide some drama. The valley was a carpet of green, punctuated by glimmering lakes. The wind was lazy and the sun was warm on my skin. I spent half an hour soaking in this classic mountain scene. Glorious places like this make it all worthwhile. 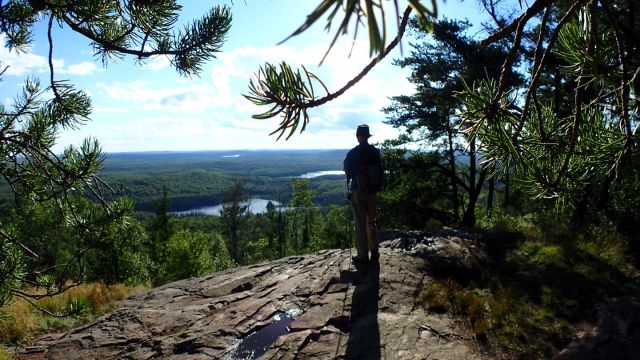 A scenic overlook just below the summit afforded magnificent views of the lakes and sprawling forest below.

Wounded Warrior
On the way back down, I began hoping someone had stolen the folding bike so I would not have to carry it out like a wounded soldier. But alas it was still there, waiting beside the trail in silent mockery of my folly.

I managed to repair the bike with a pocket knife, duct tape and a stick. I then rode it out helmeted head held high reclaiming my dignity and restoring my id to its typical state of composed overconfidence. 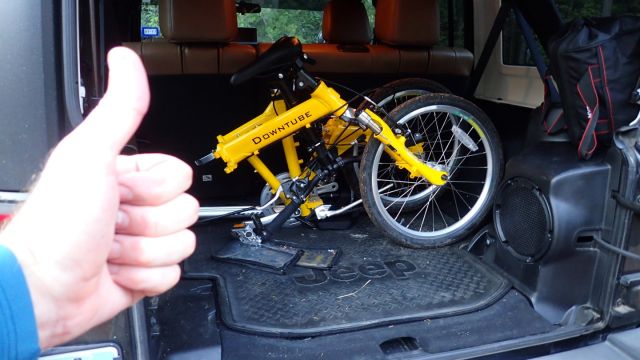 The folding bike doing what it does best; folded and stowed back in the Jeep.

This concludes highpoint #48 of 50, next stop Michigan!