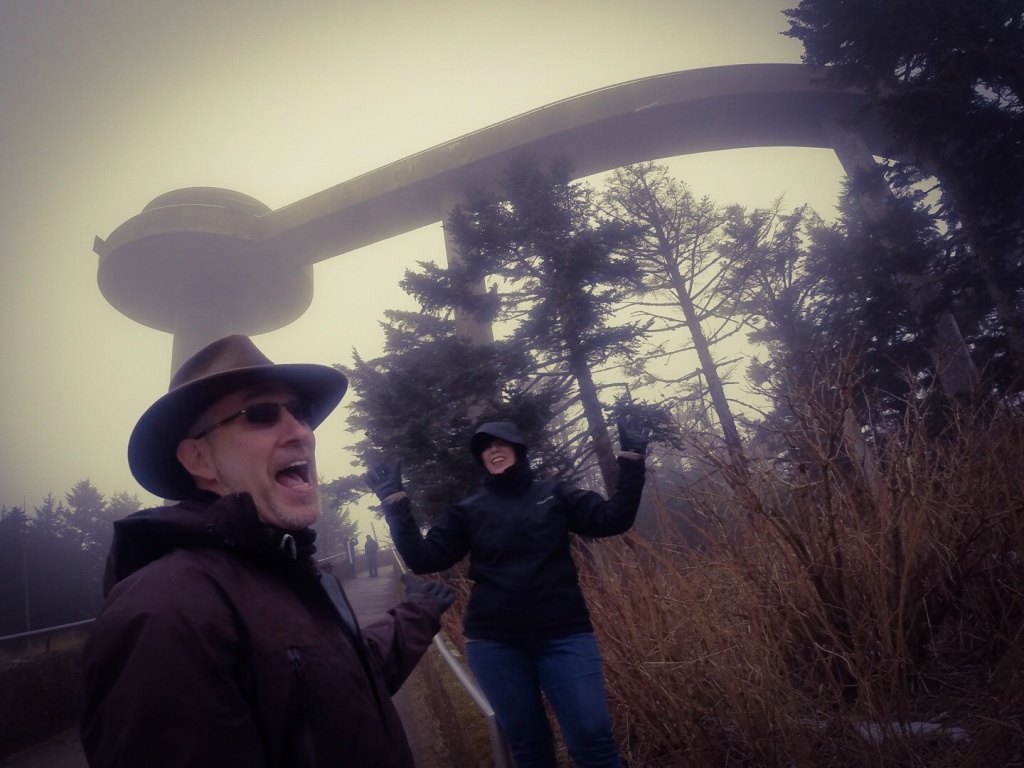 Bad Weather Forces Change of Plans
We had planned to do Clingmans Dome at Sunset, but after seeing the forecast of heavy rain in the afternoon we decided to do it in the morning. When we left Pigeon Forge at 10:00 AM, dark clouds were gathering already, giving the skies a grayish cast.

A Beautiful Drive
The drive from Pigeon Forge along 441 through the Smokey Mountains was very enjoyable. The roads were wonderfully curvy and well maintained. There were classic stone and wooden bridges, tunnels bored through the mountain, and rushing mountain streams following the road. There was still a bit of color on the trees, although most had lost their leaves. Along the way were many scenic overlooks peering into the voluptuous countryside. 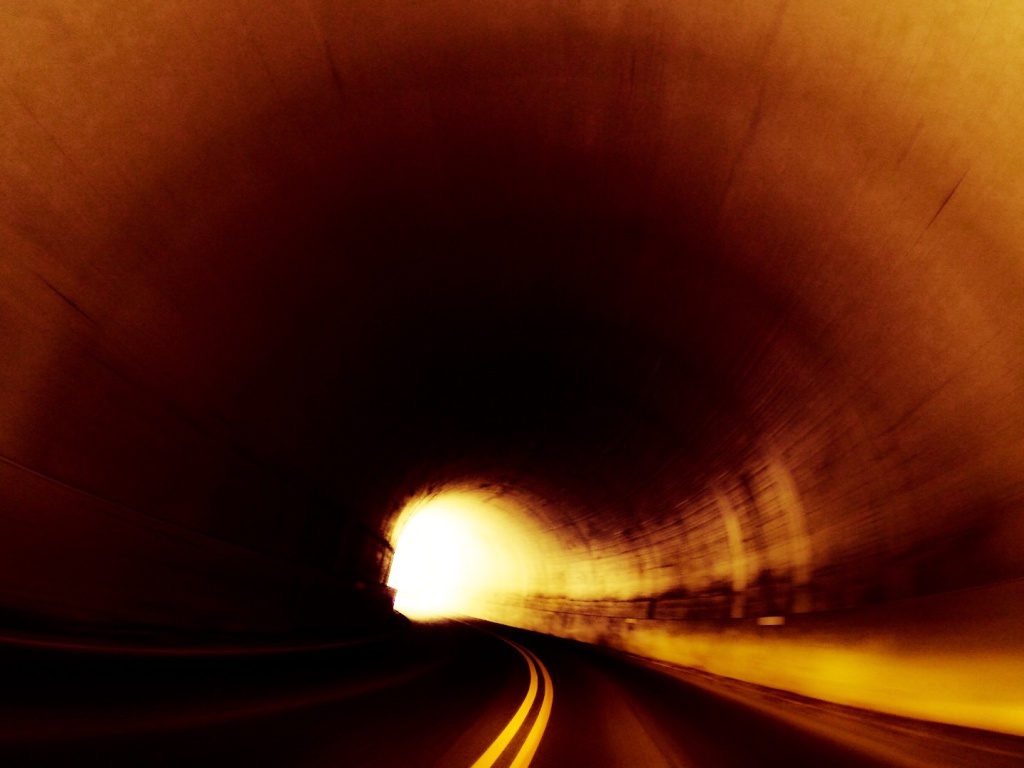 More Fog
As we drove higher the views improved until we neared the summit and found the upper mountain shrouded in fog, limiting visibility and photographic opportunities. At the parking area, the temperature was just above freezing, it was very windy, and a slimy wet fog was swirling about us.

It’s Windy at the Top
We took the steep 1 mile round trip hike from the parking area to the top gaining 332′. As we rose, the fog thickened and the wind intensified. We gained the natural summit which is shrouded in trees, and took a few photos at the base of the observation tower. 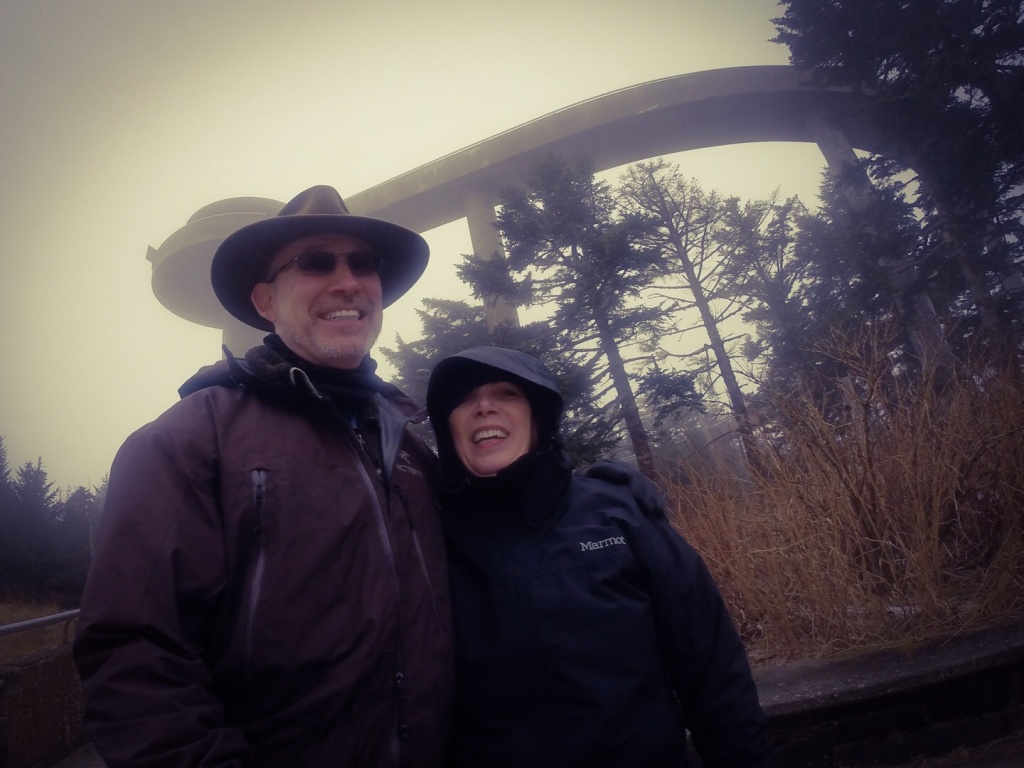 Interesting factoid; There is not a USGS marker at the summit of the mountain but down in the parking lot where it was moved during the tower construction. It is a federal offense to move those markers, so I suspect there is more to the story. Perhaps somebody forgot to put it back in its proper place during the construction, so they simply glued it to the pavement lower down.

No Tower For Me Thanks
Susan was not interested in climbing to the top of the observation tower, so she went back down while I ascended the spiral ramp to the top of the tower. The wind kept trying to steal my hat. 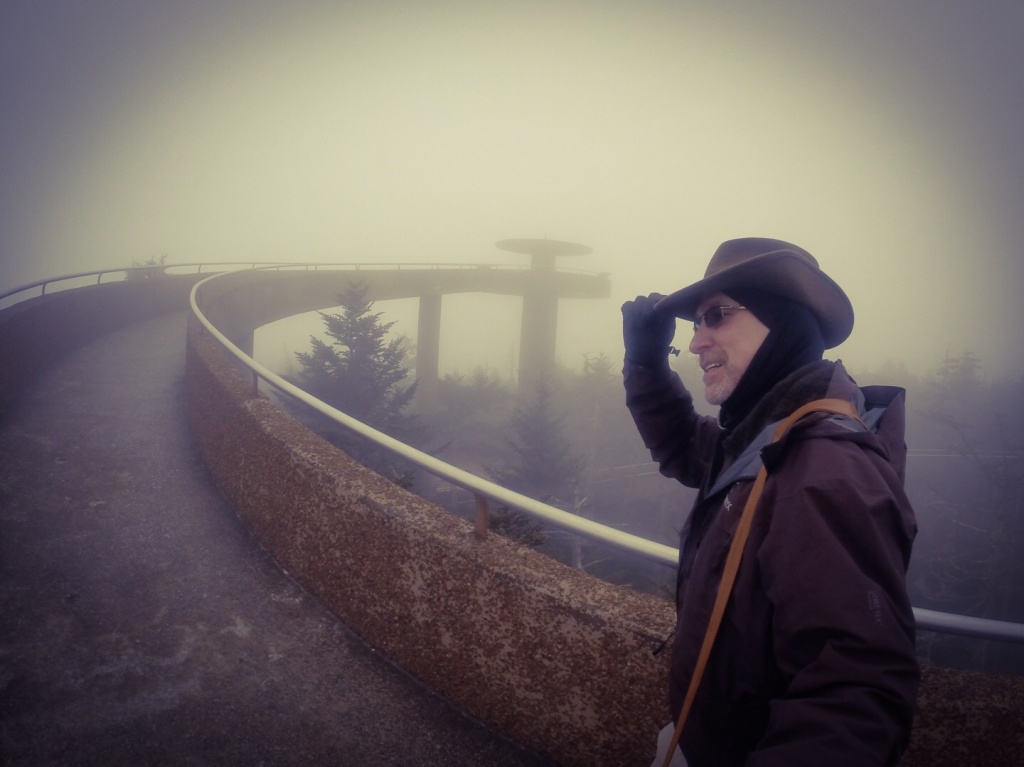 The tower resembles a flying saucer hovering well above the tree line. Had it not been for the fowl weather, I’m sure the view would have been fantastic. 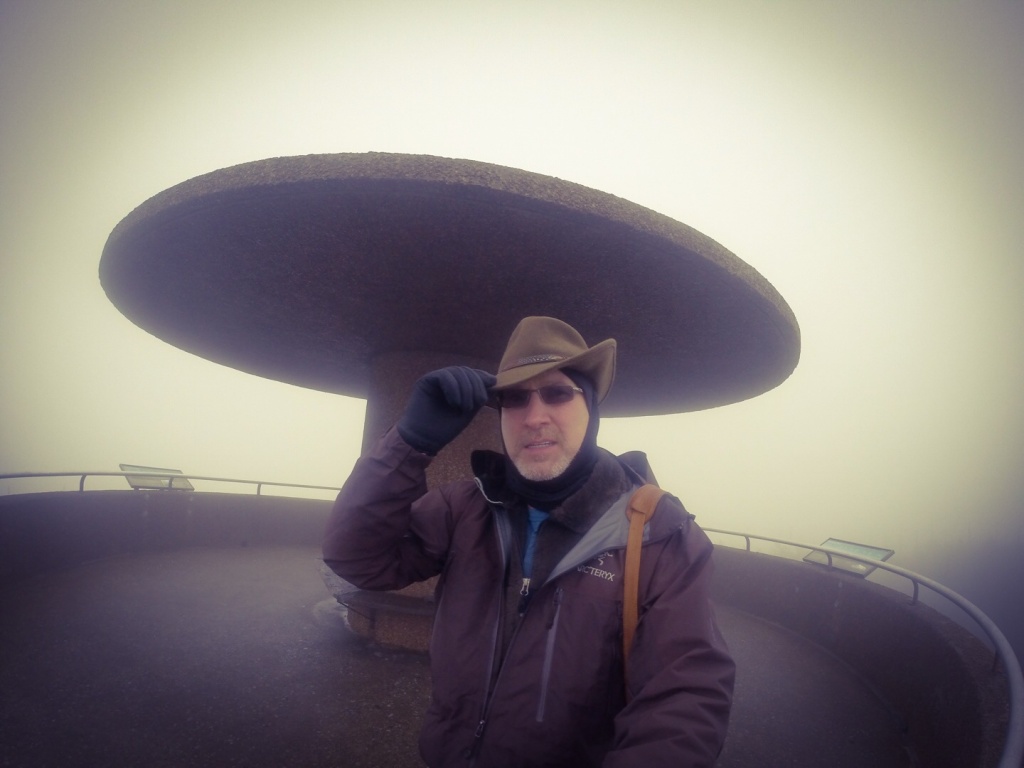 Without the trees running interference, the wind was intense at the top of the tower. It was strong enough to knock me off balance if I didn’t keep my legs widely placed. Thick banks of wet fog were whipping about the summit. 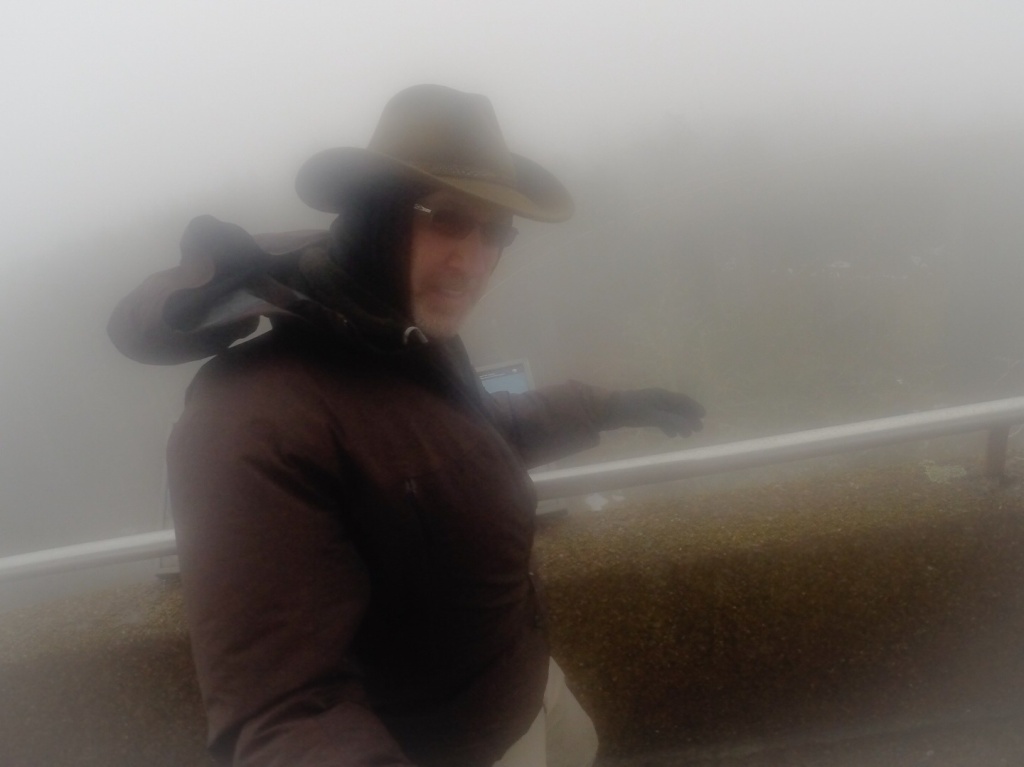 It wasn’t long before I began to appreciate the wisdom my wife displayed by skipping the tower, so I headed back down. I really should listen to her more. 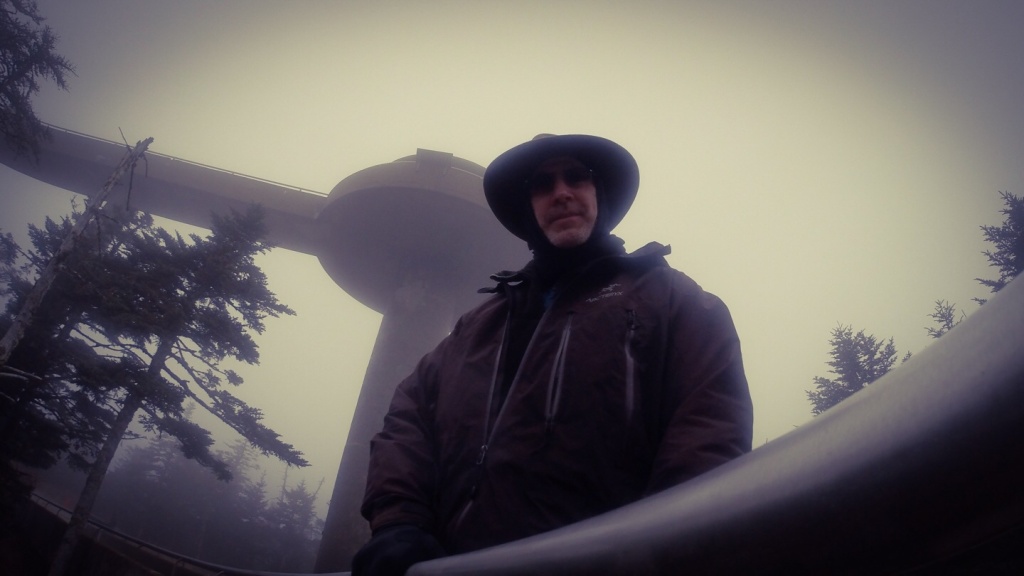 Purple Mountains Majesty
On the way back to the parking lot, the fog began to lift revealing some of that purple mountain majesty I have heard so much about. 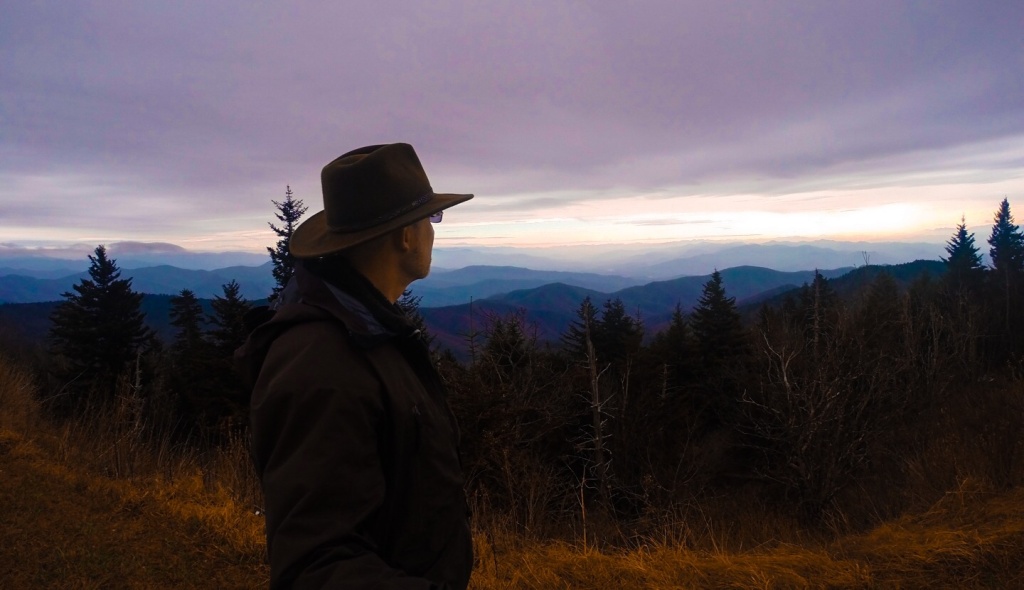 I took a few more photos from below the fog and made it back to a toasty warm car where Susan waited. 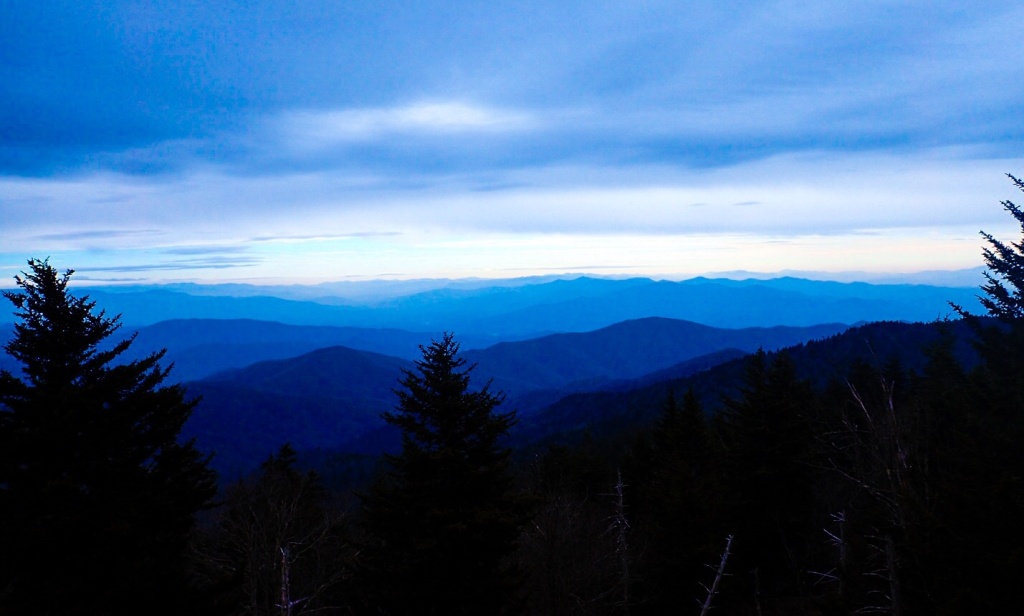 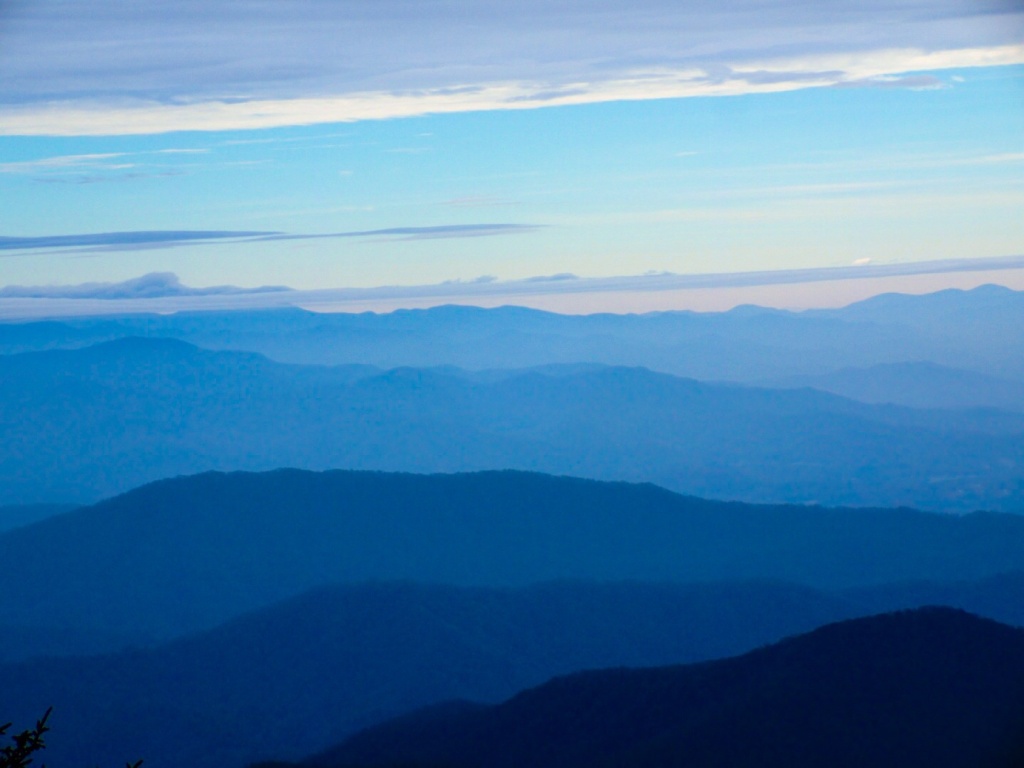