I got into a bit of trouble on the descent which had me wondering if I would live through this one. You will find the full story below.

Having read about the terrible mountain roads on Boundary Peak, I requested a rental car with lots of ground clearance, and they gave me a new Ford Explorer. I liked the tech and the cushy ride and found it to be a great car for the trip even sleeping 2 nights in the large cargo area.

The 5 hour drive from  McCarran International Airport in Vegas was long and desolate, with the occasional defunct business along the roadside. 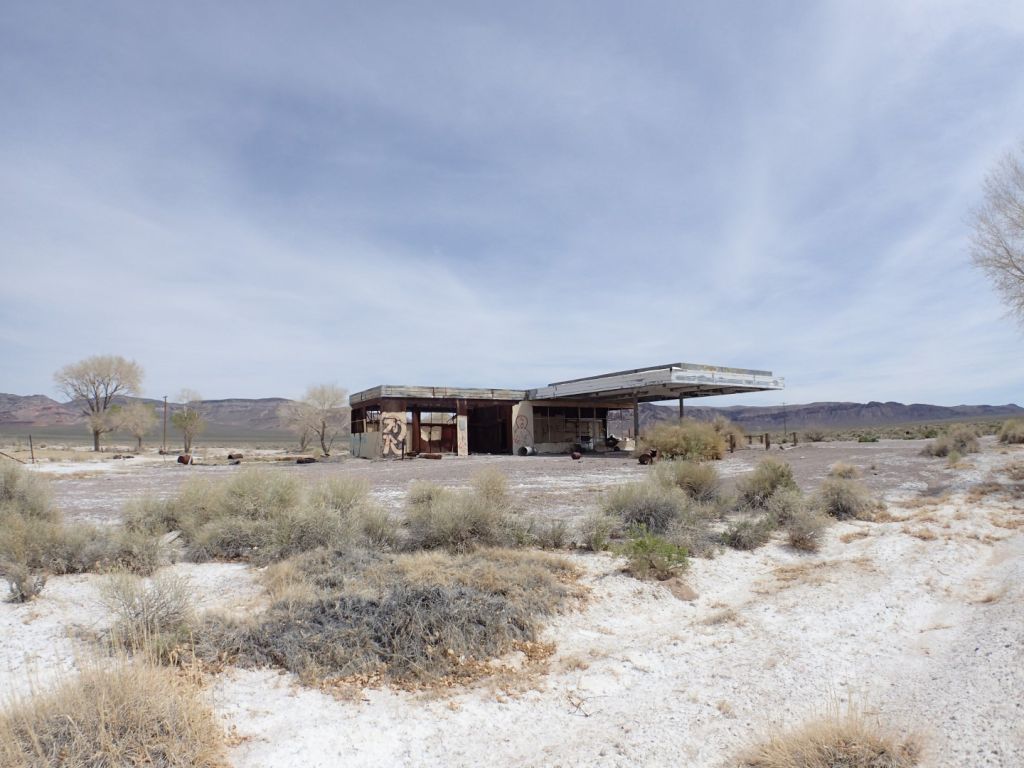 Hookers & Gasoline
At one point my fuel was getting low and I grew concerned that I was not going to have enough to make the return trip. Eventually I happened upon a brothel which sold gas along with girls. It was the only sign of civilization I had seen for hours. I ONLY purchased gas and continued on my way. 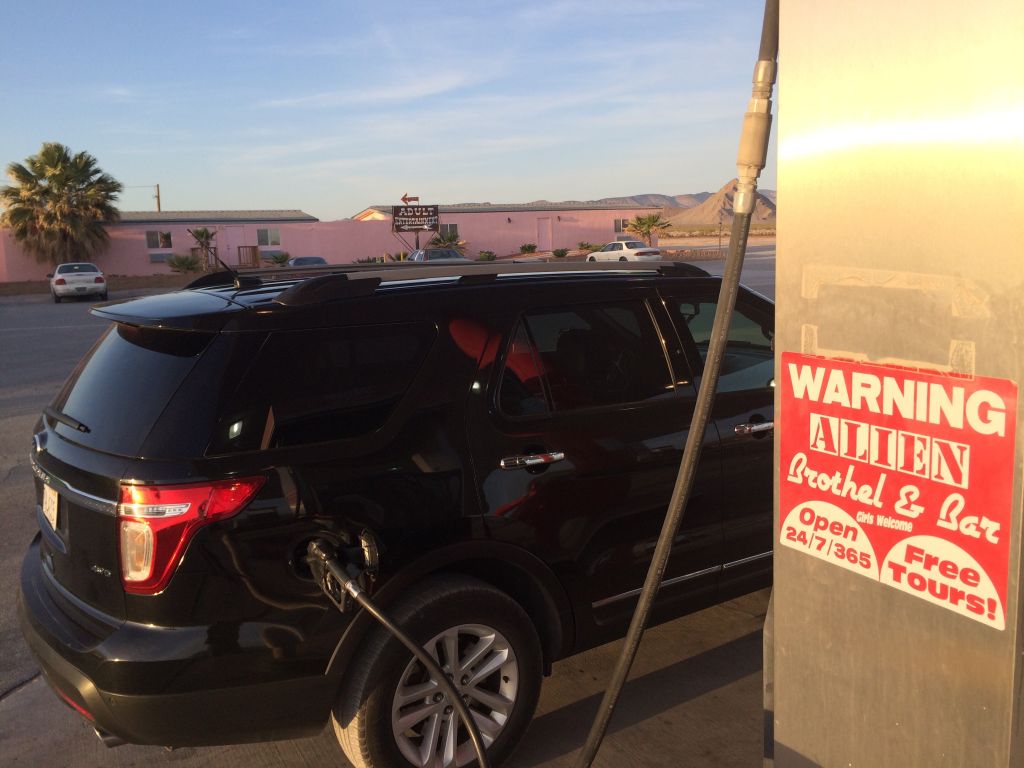 I was expecting a challenge finding the trailhead as there are miles of narrow tree lined unmarked twisty mountain roads and I had heard several accounts of folks getting lost. I had brought some google earth printouts, but they proved to be little help. I got out of the car and walked down numerous side trails looking for clues. In the end I drove 17 miles of mountain roads spending another 2 hours after leaving the highway before finally finding the trailhead.

I camped at the trailhead deciding to forgo my tent in favor of the Explorers spacious cargo area. I got 6 hours of sleep and awoke to find myself in a small valley with a bubbling brook nearby. The vegetation here was mostly brown and sparse scrub brush and there was snow in the upper sections which did not bode well

I also discovered that the rental car was very badly scratched from the brush on the way in and I feared it was going to need a new paint job. I did not opt for the extra insurance. 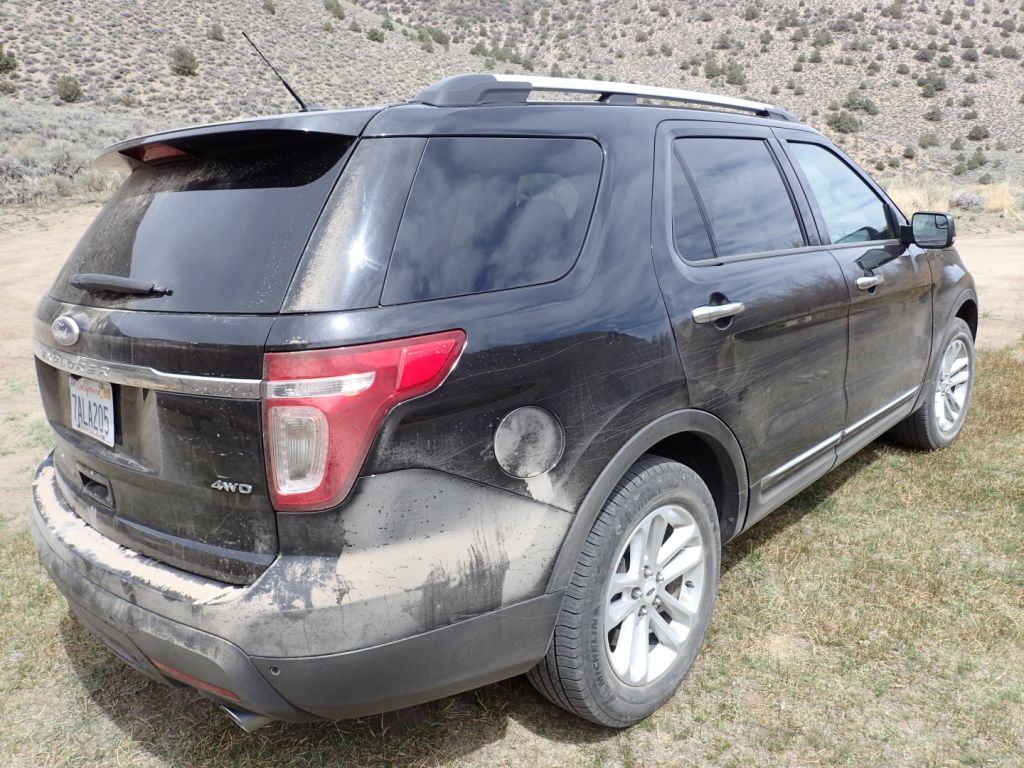 I had decided that I would sleep until I felt rested and prep for the hike when I woke up. If there was enough time, I would go for it, if not, I would wait for the following day. After getting camp sorted out,  breakfast made and my pack loaded, it was close to noon. My pack and poles weighed in at a pleasantly light 24lbs. I did not want to be on the upper mountain in the dark, but knowing that Sunset was at 7:24PM and I had such a light load, I was confident that I could make the summit and be back down in the lower valley in 7 hours so I decided to go for it. At the time, I did not know how wrong I was.

A Lonely Place
I signed the register on the way in and and realized that the last person to climb this hill was 22 days earlier. This mountain was a lonely and isolated place, and I would not see another soul for the duration of the climb. 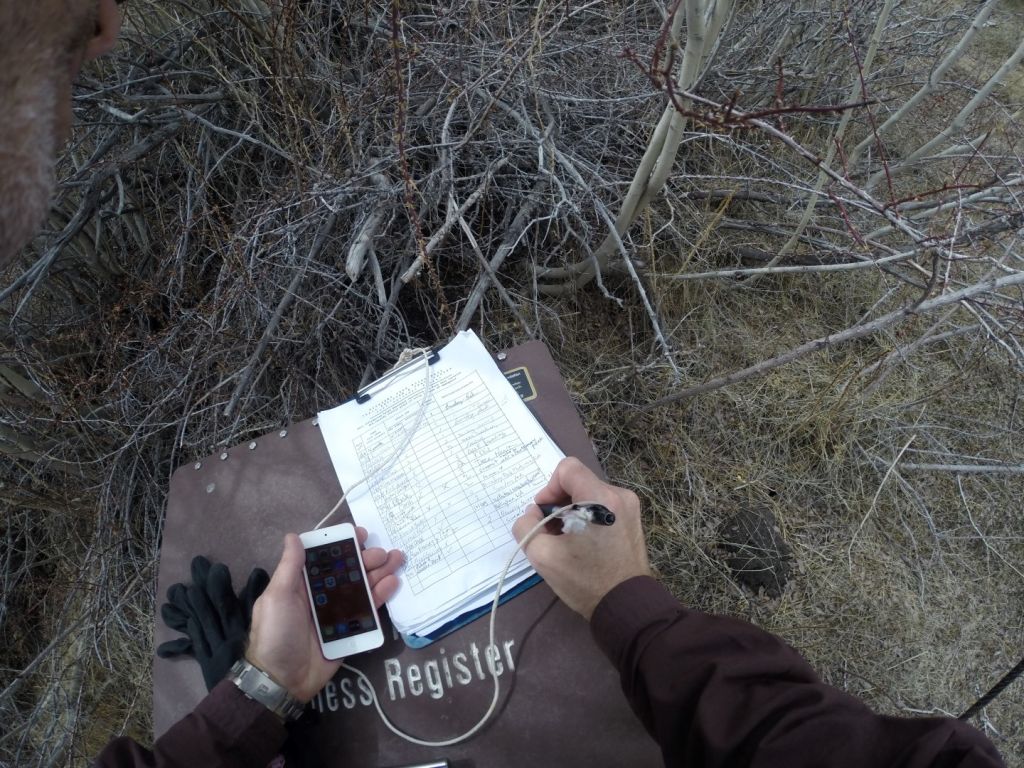 The lower mountain was an unremarkable hike through sparse vegetation and scrub crossing a stream or two along the way. There were numerous paths, making it difficult to identify the actual trail, but I knew the general direction I was headed. 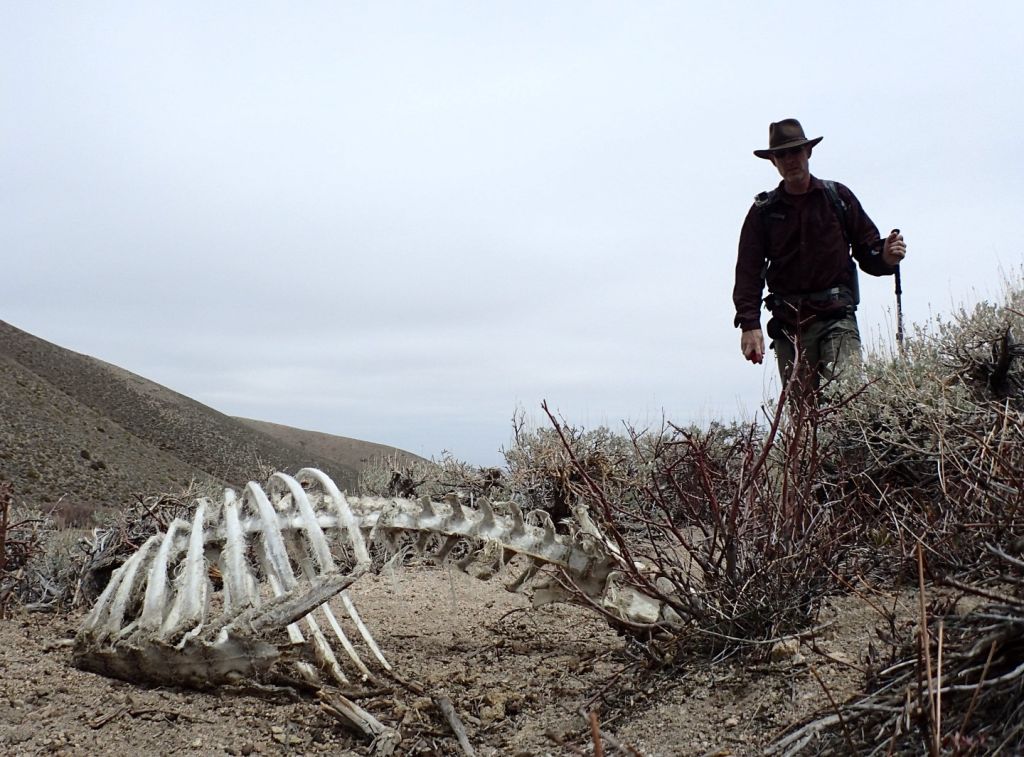 By 2PM I had reached the valley at the foot of the upper mountain. The elevation was 9,652′ and I had a good view of what I thought was the summit. I took a short break here and continued up to 10,183′ where I cached water, food, extra clothing layers and a spare flashlight at a large rock that would be easy to identify on the way down. Having lightened my load several pounds I continued on. 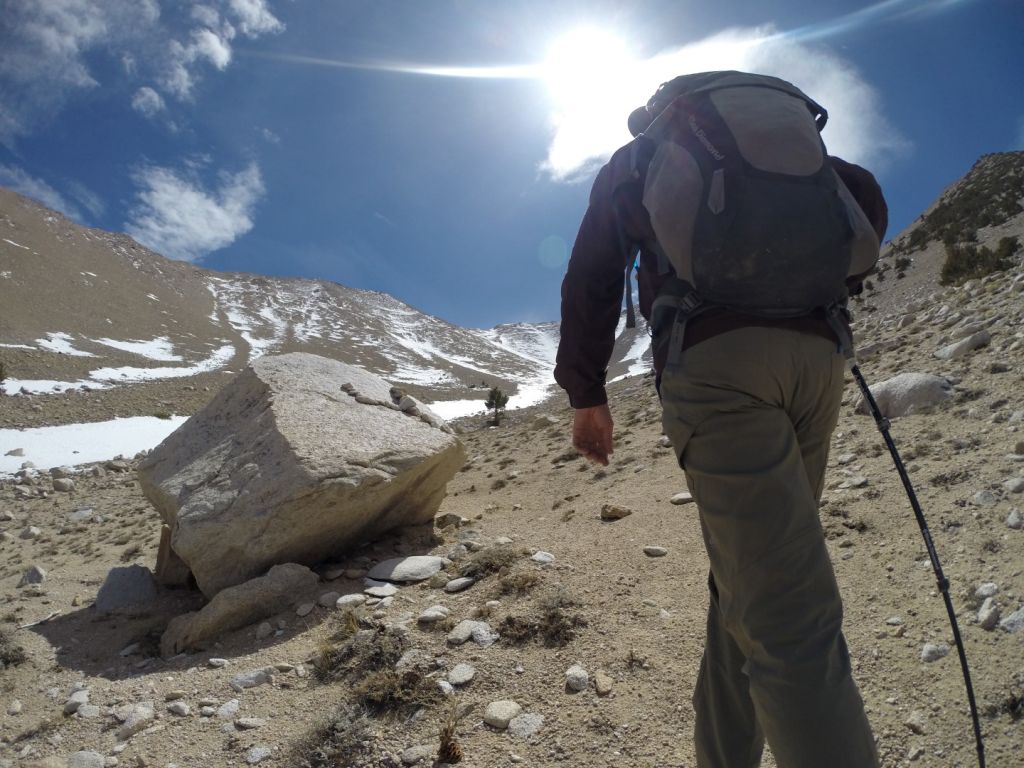 Snowy Slopes
Approaching the mountain proper, I noticed there was a lot more snow than expected. As I ascended higher, I found a deep slushy snow under a hard icy crust. Sometimes the crust would hold, but more often than not I found myself sinking up to my crotch which we call post-holing. 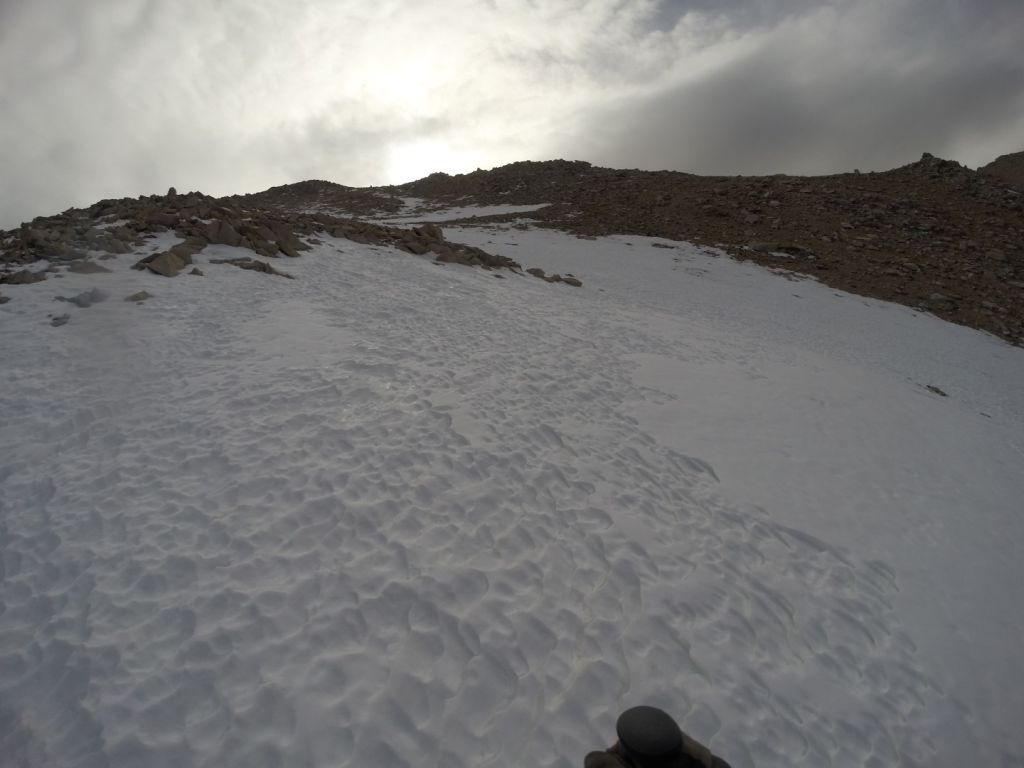 I began to search for rocks I could leap between or alternate paths that circumvented the snow which helped some, but it could not be totally avoided. I was forced to slowly fight my way up steep slushy snow post-holing again and again as I ascended. This took a lot out of me, and added hours to the climb. 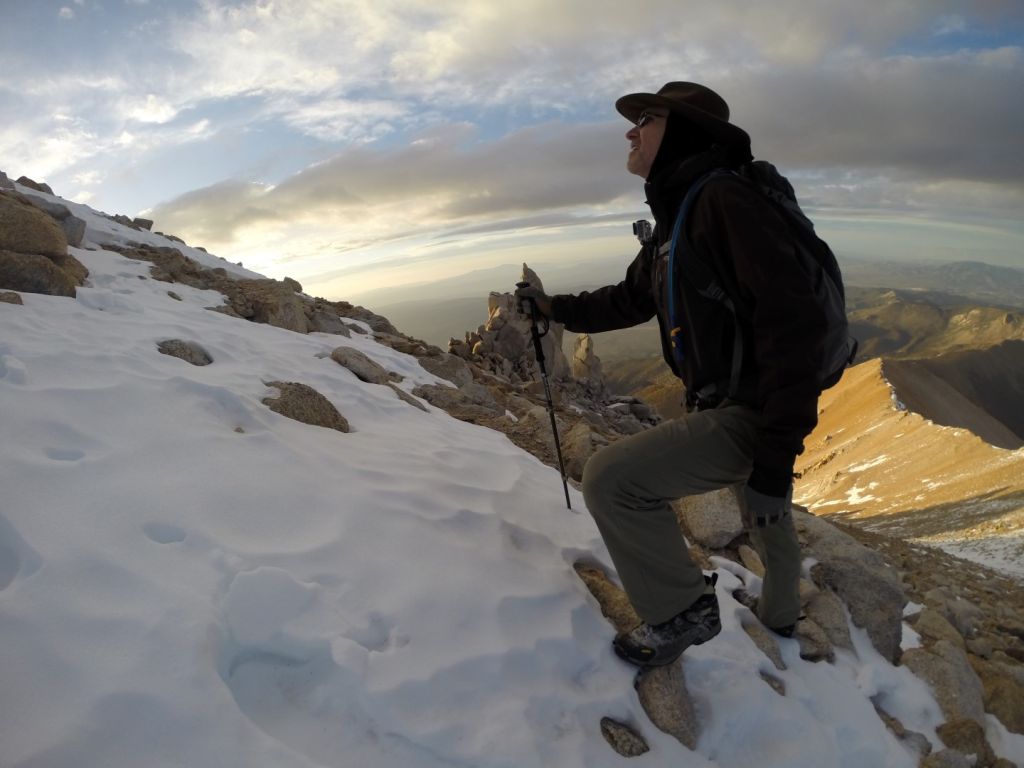 And where there was not snow, there was scree and lots of it. I’ve never seen so many loose rocks, and had even some large ones break away and begin to slide down the mountain with me. This was the nature of the mountain all the way to the top.

As I approached what looked like the summit I could tell from my Garmin InReach Explorer that it was a false summit. And once I cleared it I finally had a good view of the actual summit. It was difficult to find a proper route on the upper mountain. There were a few cairns and lots of snow, but no defined paths that I could discern. Once a pole came unclipped and slid down the hill. Knowing I might not come back down this way, I climbed down to get it. 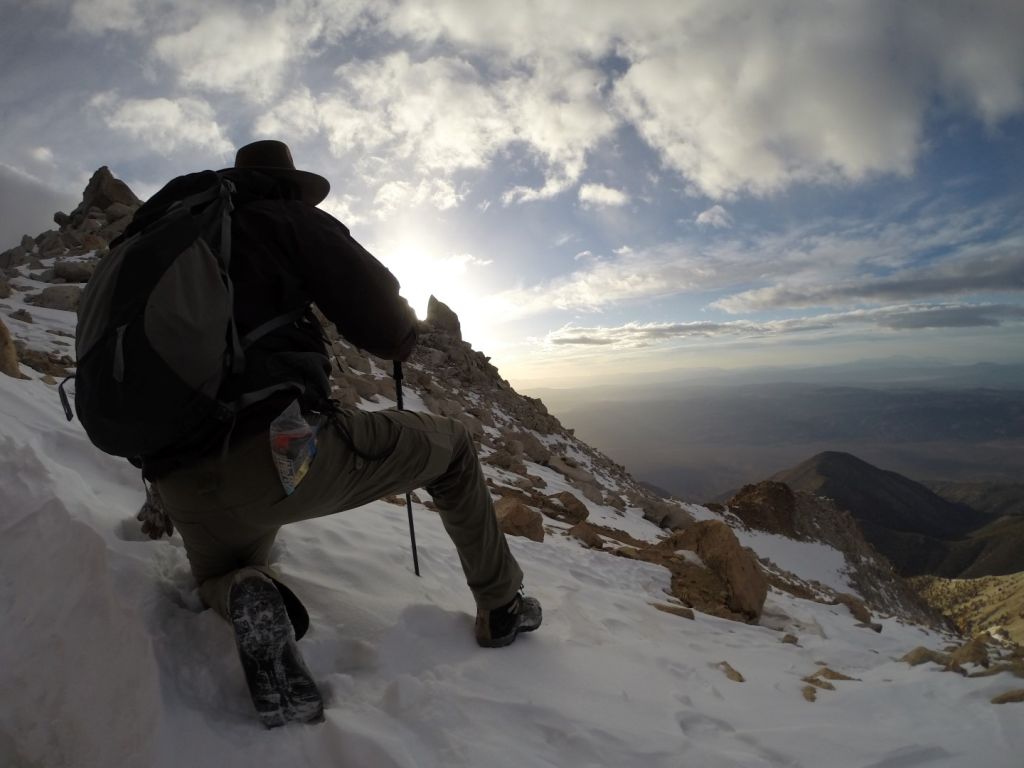 As I approached the summit a storm developed. It became very cold and windy, but the worst of the storm passed by in the adjacent valley.

Sunset Summit
I finally made the 13,143′ summit just after 7PM as the sun was beginning to set. It was well below freezing with moderate wind but tolerable. 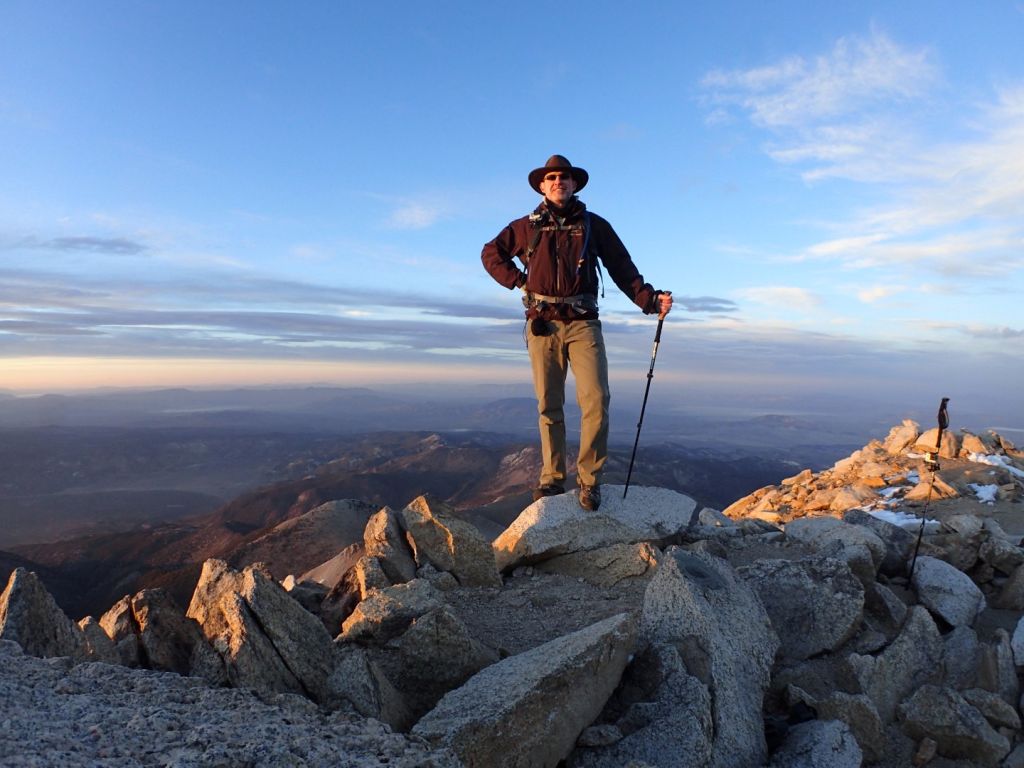 Sunset was hard upon me, so I sat down and smoked a cigar on the summit while taking it all in. It is unusual to be on a mountaintop  at this hour and it was the first time I had witnessed sunset from a mountaintop and it was spectacular indeed. 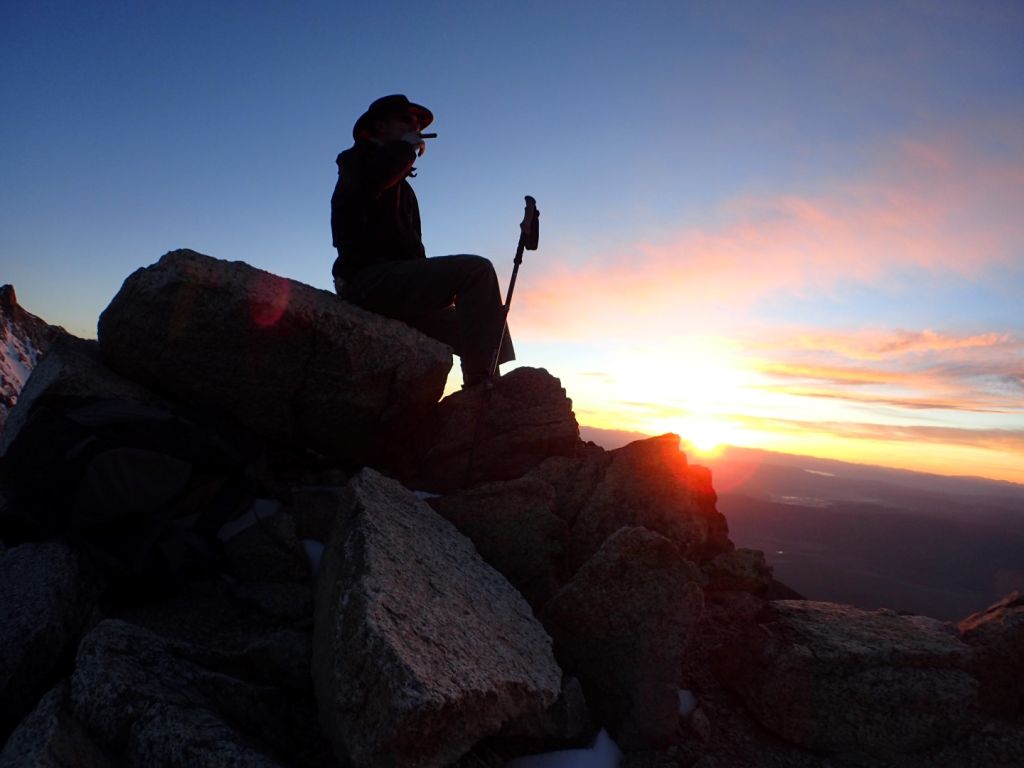 A Dark Descent
However once the sun dropped behind the mountain, the mountainside was plunged into utter blackness and I had to rely on my headlamp to see anything at all. The temperature dropped further and my iPhone froze eliminating my topographical map. Fortunately I had my DeLorme InReach Explorer which has a small screen and while it does not show maps, I was able to navigate back to the cache with it. I woould not be exagerating if i said this device saved my life. Even so, it was challenging getting down in the dark, and I had to backtrack many times. I could feel the big drops and voids more than I could see them. I was not on the same path I came in on, but I knew where the cache was and kept moving in that direction hopping I didn’t get trapped or slide off an unseen drop. At one point I found I was on the wrong side of a major ridge so I had to climb back up and over the jagged boulders to the opposite side. The snow had frozen and was now firm enough to walk on (mostly), so I stayed with the snow as much as I could. Once I cleared the rocky terrain of the upper slopes I followed a couloir (snow filled chute) that went almost all the way down into the valley. I worked my way down the snow plunge stepping my heels in to create steps. I would occasionally slip down the mountain when my heel didn’t penetrate the ice, which was a bit disconcerting but I was mostly in control and only had to self arrest a few times.

Glissading in the Dark
The real excitement began when my headlamp began flashing warning me of an impending failure. I turned off my lamp and waited a while to see if my eyes would adjust, but it was not enough. The rock and sky blended into a single cohesive blackness, punctuated only busy the he faint glow of the snow reflecting the meager starlight it could gather. I saw only two options; I could dig a snow cave and wait for daylight, or get down fast before my headlamp died. Having cached some of my clothing layers and my excess food and water, I decided getting down fast was the best option. So I put in my Goretex rain pants and proceeded to slide down the icy slope in the dark. It was the most terrifying thing I have ever done, but it got me down fast. Breathing a sigh of relief I arrived at the cache and retrieved the second flashlight, food, water and clothing.

The Lower Hike Out
The rest of the hike out was uneventful and even enjoyable. Again the DeLorme InReach Explorer kept me on the right path. This was my first climb with the new device and it may have very well saved my life as I’m not sure I would have made it down without it.

I arrived back at the trailhead just over 12 hours after leaving. Being much too tired to drive, I  stayed another night at the Explorer Hotel planning to drive out in the morning.

The drive out was more interesting in the daylight. The roads were not as bad as I had read in some trip reports and the extra ground clearance the Explorer added was not needed. It was still a challenge finding my way out,  but the Garmin kept me on the right track.

Once back in Vegas, Mario at Mad Mobile Auto Detailing who was willing to meet me on a Sunday, expertly buffed out the scratches for a few hundred dollars.

I myself came through this one without injury, and it was the first time I was not sore afterwards which I take as a good sign. I don’t regret the experience, but it would have been wiser to wait another day, get full nights rest and make an early start.

After the climb I met my good friend Rick Overholt in Vegas and we attended the massive ISC West security show where I researched security camera solutions for the offering I’m working on for Truewater.