My plan has been to do the hardest ones first since I’m not getting any younger. At this point I have completed all the class 9 climbs and most of the eights and sevens. There are certainly challenging climbs remaining, but the only one I believe will truly stretch my limits is Denali which is the only class 10 state highpoint. Denali requires that you carry a 75lb pack and drag a 75lb sled 46 miles for as long as 3 weeks in tornado force winds and temperatures that can reach -100 with windchill. Many say Denali is the worlds most physically demanding mountain, and it is certainly the coldest.

Susan and I visited Talkeetna while celebrating our 20th wedding anniversary in June of 2013. We did a flyover of the mountain and you will find that Interactive GPS Track here.

Denali Expedition Itinerary
Day 1: Morning meeting in Talkeetna at the Fireweed Station Inn. After introductions, orientation and final gear check, we’ll board a ski-equipped aircraft and fly to Base Camp on the southeast fork of the Kahiltna Glacier (7,300 ft.). The flight to Base Camp is marvelous, presenting outstanding views of a variety of peaks, including Mt. Foraker, Mt. Hunter and Moose’s Tooth. Upon arrival, we’ll prepare our Base Camp.

Day 2: We’ll carry to our intermediary camp (approximately halfway to the traditional Camp I). This gives us a chance to get an easy start and lets us sort out any adjustments in gear and sled-pulling setup.  This is important, as we will be pulling sleds for the next eight days.

Day 3: Carry loads to Camp I (7,800 ft.). Snowshoes may be necessary between camps on the lower part of the mountain.

Day 5: Our carry today depends on snow/weather conditions and how the group is feeling. We’ll either ascend back to our cache and camp for the night or continue on to 11,200 ft. (Camp III.) Camp III is located in a small cirque at the base of Motorcycle Hill.

Day 6: We’ll carry all our gear to Camp III.

Day 7: We’ll carry half our gear up Motorcycle and Squire Hill and then traverse a long gradually rising plateau to Windy Corner. We’ll continue on around this narrow corner for a few hundred yards to make a cache (at approximately 13,500 ft.) and return to Camp III. This day provides stunning panoramic views of the surrounding peaks and the northeast fork of Kahiltna Glacier, 4,000 feet below.

Day 10: We’ll carry loads to 16,500 ft. and return to Camp IV. From Camp III, we’ll ascend 1,100 ft. of moderate snow slopes to reach the beginning of the fixed lines. Using ascenders on the lines to self-belay, we’ll climb the Headwall, which consists of 900 feet of 45Â° to 50Â° snow and ice up to the crest of the West Buttress. From there, the climb takes on an entirely different nature with views that fall off in both directions several thousand feet below us.

Day 12: Carry and move to High Camp (Camp V, 17,200 ft.). We’ll again ascend the fixed lines and follow the exposed ridge 600 feet up around Washburn’s Tower, and on to Camp IV, which we establish on a saddle just above the Rescue Gully. It overlooks Camp IV 3,000 feet below.

Day 13: Rest day. Rest and prepare for the summit attempt.

Day 14: Summit day. We traverse across a steep snow face to Denali Pass. From here, we’ll follow gentler slopes to reach Archdeacons Tower and a large plateau at 19,400 ft., known as the “football field.” From the plateau, we’ll ascend moderate terrain to the crest of the summit ridge, where we’ll look down upon the immense 8,000 ft. South Face, with Cassin Ridge and the South Buttress in full view. Once on the summit ridge, excitement grows as we’ll climb the last 300 feet to the top of North America. From the summit, we’ll have a 360° view of the entire Alaska Range, with Mt. Hunter and Mt. Huntington to the south and Mt. Foraker to the west. These peaks, along with scores of others, make this mountain view one of the most impressive in the world. After taking photos, we’ll descend to our High Camp.

Days 15-16: Return to Base Camp. From High Camp, we spend two days returning to Base Camp, where we will board a ski plane and return to Talkeetna.

More About Denali
Denali is the grand centerpiece of Denali National Park, and is surrounded by five glaciers and numerous icefalls and countless crevasses. It takes 3 weeks to climb, and from starting point to summit, the elevation rises 18,011 feet. With this three and one half mile elevation gain (the greatest on the planet) and 150 lbs of gear to wrestle up the mountain without Sherpas or pack animals, it is not surprising that 50% of the climbers turn back.

Arriving at camp only signals the start of several more hours of work digging pits and carving blocks of ice from the glacier to build protective walls around your tent to keep the tornado force winds from shredding it while you TRY to sleep. Once camp is secure, you can cook your meal, and try to replace some of the 5,000+ calories you are burning per day which is also a challenge in the appetite and morale killing altitude.

Long, Long Days
The 19 hour days during the summer climbing season are both blessing and curse. It doesn’t really get dark, but merely transitions from sunset to sunrise. The long days give you the much needed time to get the work done, but also make sleep challenging at best. The intensity of the ultraviolet rays at this altitude combined with the thin atmosphere burns skin and eyes with equal ferocity. If that is not enough the ice reflects the sun’s damaging energy back at you for a second pass. Without specialized eye protection, you will go blind.

Danger with every step
The trek up Denali is laced with crevasses, some hundreds of feet deep, which more often than not are concealed with pristine snow. You walk across them blissfully unaware of the danger beneath. Sometimes the snow will support your weight, and sometimes not. This ever present danger requires climbers to travel in rope teams ready to dig in and protect one another in the event of a fall.

Buried Alive!
Avalanches are an ever present threat in alpine environments, and Denali is no different. Like everything else on this mountain, Denali’s avalanches are grand spectacles, tossing house sized blocks of ice into the air as they race down the mountain at speeds over 250 MPH like a rocket powered freight train.

How’s the Weather?
Rapid manifestation and unmatched intensity characterize the weather systems here. Denali’s mass is sufficient to create its own localized storms which can brew up in an hour or less. Other storms roll in suddenly from the Bering Sea, slam into the giant wall of mountains and are held captive there. Sometimes multiple storm systems are mixed creating the legendary super-storms that Denali is known for.

Even without storms, it’s a brutally cold place year-round with an average temperature of -28 on the summit. At the 18,000 ft. weather station, temperatures have been measured at -118° F with wind chill, which is cold enough to flash freeze a human caught in the open. And it gets even colder at the summit, with temperatures reported as low as -148° F with wind-chill factored.
Denali is the coldest place in the world outside Antarctica. In fact, during the summer months it can routinely dip to -40° F (without wind chill) making Denali colder than any location in the lower 48 during winter.

Denali vs. Everest
As the two most iconic mountains in the world, it is hard to resist comparing Denali and Everest. Both are hard alpine climbs that will kill the unprepared. But they are very different mountains each with its own distinct personality. That said, Denali is generally considered more of a physical challenge and Everest more of a technical challenge.

It takes a village to climb a mountain, at least on Everest anyway. Everest, expeditions will have guides, yaks, group Sherpas, personal Sherpas, and sometimes even doctors. Sherpas carry the loads and manage camp, even to the point of bringing you hot tea while you lounge in your tent. Denali expeditions typically have guides but finding yourself yakless you will carry your own 150lb loads, build your own ice walls around your tent, and yes, even make your own tea.

Jutting directly into the jet stream Everest is by far the windier of the two. There is a category 1 hurricane (74miles/hour) blowing 25% of the time at the Everest Summit. From late autumn (approx. Oct 20) until end of January there are hurricane force winds at Everest the summit 75% of the time. The highest forecasted wind speed, 175 MPH was for Feb 6, 2004. To put that in perspective, a 156 MPH is classified a category 5 hurricane.

Because of its far northern latitude, Denali has lower barometric pressure, affecting the acclimatization of climbers. The lower barometric pressure is because the troposphere is thinner near the poles and thicker at the equator. Likewise, Denali has less oxygen on its summit than mountains close to the equator, like Everest, making Denali climb like an even higher mountain.

Everest’s vertical rise is a modest 12,000 feet from its base as it sits on a 17,000 ft. high plateau. Denali rises about 18,000 feet from its base, which is at 2,000 ft. This makes Denali an actual 5,000 ft. longer ascent than Everest assuming you start at the base of course. Most teams fly in landing on the southeast fork of the Kahiltna Glacier at 7,300 ft. Even from there it is a 13,200 straight elevation gain, but with the double carries required, you end up closer to 17,000. 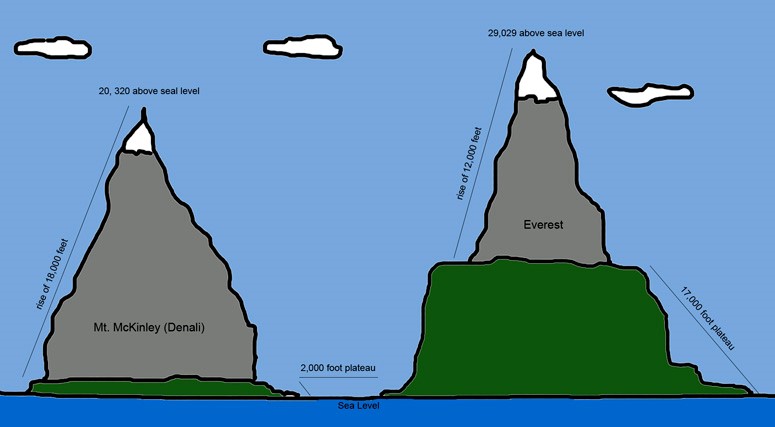 And most climbers use oxygen tanks, which effectively reduces the altitude by another 3,000 feet. Making Denali climb like a mountain 8,000 ft. taller than Everest.